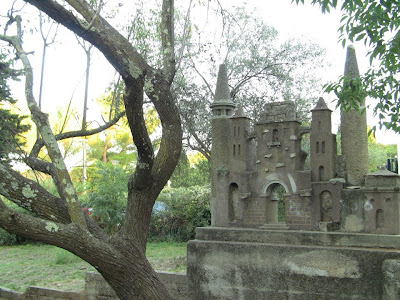 
This art environment with the poetic name the villa of a hundred views, located in Montpellier in the south of France, has a wonderful extended castle-like structure.

The Villa was created by Victor Grazzi (1896-1970), who was born in the Lombardian area in Italy.

He married in 1921 and a year later he fled with his wife Ida from the fascist regime to France, where the couple first went to live in the Isère area, but soon moved to the city of Montpellier.

Grazzi had a job as a mason. He was a very enthusiastic supporter of the use of reinforced concrete as building material -at that time a pioneering method- and followed a correspondence course on this subject at an institute in Rome (the Academy of Reinforced Concrete)

In 1950 he and his wife began constructing a house on a plot of land they had acquired in the Aiguelongue area, in the (then) outskirts of Montpellier.

Ida Grazzi sadly died in 1954. Victor Grazzi, now being alone, went on expanding the caste-like structure, a project he would continue for the rest of his life. The site was named the villa aux cent regards, as far as I understand because of the number of windows in the construction.

It is a complex of larger and smaller buildings made of concrete, with towers, arches, pathways, and depictions of persons and animals.

In his creative constructions Victor Grazzi could express his skill in working with reinforced concrete, for example by making circular and slender forms. He would also use recuperated materials collected on the junk yard. 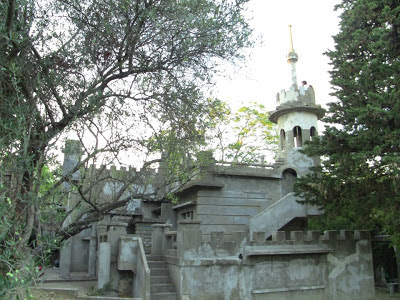 Victor Grazzi unexpectedly died in 1970 (he went to the hospital for some simple surgery, never to return).

His creation was left unattended to. The site became a place that was visited by people who where interested in it as a hide-out, like clochards and love-couples.

But there were also people, local and foreign, who were interested in the maintenance of the site as a creative construction..

In 1982 the local authorities, who meanwhile had become owners of the site, decided to protect it by placing a fence around. The city itself had no idea what to do with the site and began considering to demolish it.

The site has become an art center

A new development, however, took place. Since 2005 the site is cared for by Michel Fressoz, the owner of a neighbouring art gallery Saint-Côme. The idea is to run the Villa aux cent regards as an art center, where expositions are held and cultural meetings and conferences are organised.


That is an excellent solution! Bravo for all those persons and local organisations who supported this approach.