Three panels mark the entrance of the (psychiatric) Hôpital Sainte Anne in Paris. Together, they once formed a wooden floor of about fifteen m², engraved with a message of eighty lines by a young man named Jeannot. Because the story has so many tragic aspects, his family-name is not made public and he is generally referred to as Jeannot le Béarnois.

Jeannot was born in 1939 in a small community in the former Béarn department, in the south of France, where his parents owned a (farm)house on a terrain of some 40 hectares. As a young man, Jeannot may have been a nice, sociable person, but problems arose when in 1959 he had to deal with his fathers suicide.

His mother, Jeannot and one of his sisters continued to live in the house, and the small family gradually became more and more isolated.

Jeannot showed paranoid behavior. Admission in a psychiatric hospital was imposed, but he resisted so violently that authorities did not further intervene. When the mother died in 1971, permission was granted to bury her in the house, "under the staircase", as is reported in articles about Jeannot.
The next months Jeannot wrote down a text on the wooden floor of the living room. With a hand drill he made small holes which he connected with lines cut out with a gouge or a knife, in this way giving shape to the text in capital. Carving eighty lines of text must have entailed many months of intensive labor. 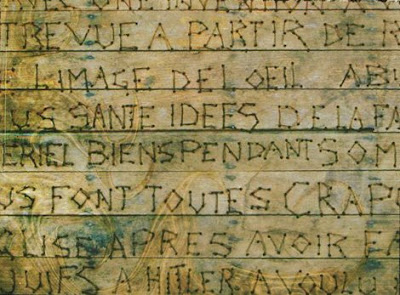 Soon after completing this job, Jeannot died and maybe he had starved himself to death (1972). Together with his mother he was buried in the local cemetery

The sister continued living in the house, alone, isolated, hardly coming outside. She was found dead in 1993.

The house was sold. The brocanteur who dealt with the furniture, noticed the inscriptions on the floor and informed someone of his family, named dr Guy Roux, a psychiatrist interested in art brut. Dr Roux became the owner of the floor in exchange for a brand new floor he paid the new owner of the house. Later he sold it to the pharmaceutical company Bristol Meyer Squib.

Expositions of the floor

The plancher for the first time was exposed in 2000 during an international psychiatric congress in Paris, as part of an exposition entitled 50 ans d´expression en milieu psychiatrique (50 years of expression in the psychiatric setting). Some years later the plancher was exposed in the Bibliothèque Nationale in Paris, which gave rise to a heated public debate (is it acceptable to present as a work of art what someone in great psychic need gave expression to?)

Due also to the cooperation of Dr Jean Pierre Olié, professor of psychiatry and chief psychiatrist of Ste Anne Hospital, it was arranged that the floor, cut in three parts, from 2007 on was on display at the entrance of a department of the hospital in the rue Cabanis.

The present installation of the plancher on the Cabanis street might be temporary, because as I understand there were plans to make the hospital more open by renovating the main entrance. The carved floor by 2010 could get there its ultimate location, hopefully in a less caged and more respectful way of presentation. Maybe the entrance hall was renovated, but Streetview shows that in 2020 the panels with the text were still located along the rue Cabanis,
The text

The text as written on the floor can be found in French on the website Tryangle. When in may 2009 I wrote this post, I had not yet found an English translation, so I made one myself (see OEE texts),

It says in general that religion is the cause of evil in society, and the church uses electronic devices to influence the minds of men.