This facade of a former clothing store, a decorated exterior, is currently still present in Saint-Dizier, a town in the Champagne-Ardennes area in north-western France.

Marcel Dhièvre (1898-1977), born in Laneuville-au-Pont, some 8 km east of Saint-Dizier in a family of agricultural workers, from birth on had an handicap: he could not use his right hand because it was paralyzed. Nevertheless he has become known because of the way he decorated the walls of his shop of clothing and related items on the Avenue de la République, a property he had bought in 1922.

The story of the decorations begins after World War II. Around 1950 Dhièvre made some mosaic decorations on the facade of the house in Eurville, outside Saint-Dizier, where he lived with Constance Coulasse he had married in 1937, after his first marriage (1920-1935) had failed.

Dhièvre apparently liked making these decorations and soon he shifted his attention to the facade of his shop in town. 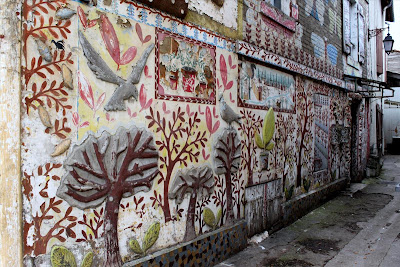 He began decorating the shop's exterior with mosaics, little ornaments and representations of flowers, trees and birds. A number of mosaics refer to Parisian buildings, like the Eiffel Tower, the Arc de Triomphe and the Chambre des Députés.

He also decorated the interior with wall paintings and frescoes and he made paintings on canvas in a naive style, which nowadays are in the collection of the local art museum 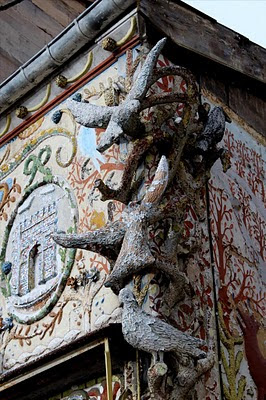 After Dhièvre's death the house was sold to a new owner who was interested in saving it as an art environment. In 1984 the house was registered as a Monument Historique and in 1985 (January-April) the local museum had an exhibition of Dhièvre's artwork.

However, the new owner hadn't the necessary funds available and could not prevent some decay, like mosaics losing their colors and parts of them falling down.

A local group of friends of the Little Paris, Entre Tenir, took action to promote the preservation of the decorations. With success, since in 2008 the mayor of Saint-Dizier announced that the city's budget for 2009 would allow the city to buy the property and start a renovation.

In 2009 the city bought Little Paris indeed and developed plans to restore it. The project was entrusted to Renaud Dubrigny, an employee of the city of Joinville who had a lot of experience in doing this kind of work.

The restoration project started in March 2011 and went well.

In the weekend of September 17/18 2011, during the journées patrimoines (heritage days), the public for the first time in many years could take a look at the decorations in the interior. 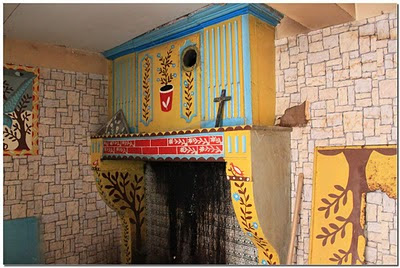 Inauguration and current use

The restored house was officially inaugurated on September 15, 2012, during the Journées du Patrimoine.

At this occasion the city published a website about the Petit Paris art environment (not available anymore). This website had an article by French art critic Laurent Danchin, which was republished in a translation into English in OEE texts.

For a couple of years it it remained unclear how the renovated building could be used, until in late 2017 it was announced that it would become kind of a cultural café, which might be a good use indeed.

In July 2019 it was announced that this cafe will open as Bar au Petit Paris in September 2019. A Facebook page meanwhile has become available. Here is a report by French TV (July 2019) about the re-opening of the site:

More documentation
* the website Habitants-paysagistes (Lille Art Museum, from March 2018 on) has a variety of pictures by Francis David (no dates) and l'Aracine (1981-1996) and also documentary panels by Rene Escard (1970-1996)
* article on the website of the municipality of Saint-Dizier
* pictures of the exterior on the weblogs of Sophie Lepetit and of Brigitte Rebollar

* pictures of paintings by Marcel Dhièvre, mostly done in a naive style, in the collection of the local museum
* article by Laurent Danchin, translated into English and republished in OEE-texts
* article by Dr Tony Shaw (September 2021) on his weblog
Video
* video of the renovation by Voix de la Haute Marne (Daily Motion, 3'47")