The picture shows part of the around 550 sculptures made by Veijo Rönkkönen (1944-2010), as displayed around the house where he lived in the neighbourhood of Parikalla in the south-east of Finland.

At age sixteen, in 1960, young Veijo Rönkkönen went to work in a local paper mill. Around the same time he began making sculptures, mainly depicting people in a rather naturalistic way. He displayed these creations in the park-like garden of the family house. 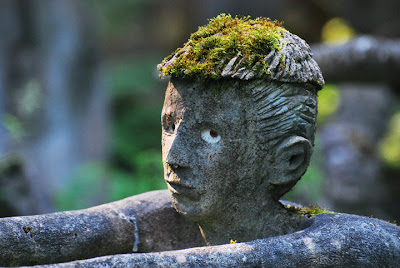 One of the features of his work is a collection of about two hundred males in various asanas (yoga poses) , displayed as a group in a part of the park. Compared to what would be exercised in a yoga class these are many poses (and a lot of sculptures too...)

All his life Rönkkönen lived in the house were he was born, first with his parents and later, after his parents had died, alone. He liked to be on his own and was not much around in his garden to meet visitors.

His sculpture garden has become rather popular in Finland. In the years before Rönkkönen died every summer some 25.000 people would visit the site. It had become a tourist attraction indeed.

Although Rönkkönen would not meet them personally, these visitors were very welcome and they didn't have to pay an entrance fee, provided they signed the guestbook.

Veijo Rönkkönen also did not like the idea that his sculptures would be transported to be shown on expositions. However, he is one of the self-taught artists whose work could be seen (by photographs, I presume) on an exposition in 2009 about Nordic outsider art, entitled Other Art.

In 2007 the Finnish state awarded Rönkkönen with a national cultural price.

Future of the site assured

No arrangements for the future of the sculpture garden had been made and admirers of his creations took action to save the site for the future. Both a group of friends and a committee of experts on outsider art were active in promoting the continuity of the site.

In October 2010 it was announced that the site (house and garden) had been bought by Reino Uusitalo, owner of one of the most important Finnish paper industries. Plans have been developed to provide the site with its own management and to ensure a sustainable exploitation of the site.

On July 23 2011 the sculpture park was reopened for the public. This was featured with an exposition in memory of Veijo Rönkkönen, which lasted until september 30, 2011.


* The website of the sculpture park Parikkalan Patsapuisto
* Veli Granö, Veijo Rönkkösen todellinen elämä (The real life of Veijo Rönkkönen), Maahenki, 2007 (first edition sold out, second edition can be bought at the shop of the sculpture park, extracts on website Books from Finland)
* Article by Eva Pursiainen, Joogaavia patsaita ja tekohampaita. Parikkalan patsaspuistossa voi katsoa. on website Yle.fi, with a variety of pictures
* A large series of pictures (2018) by Sophie Lepetit on her weblog, here, here, here, here and here
* On her weblog Sophie Lepetit also published an impression of her visit to the site in 2018. A translation into English of this article is available on OEE-texts
Videos
* Video by Veijo Vaakanainen showing the sculpture garden in wintertime (6'46", YouTube, april 2012

* Video by Veli Granö (9'05", November 2013) with neighbours talking about Rönkkönen (subtitles in English)