Above picture depicts the entrance of Göteborg Kunstmuseet, Sweden, which in the spring of 2009 had an exposition, entitled Annan Konst (Other art).

Curated by Staffan Backlund and Borghild Häkansson from the Postfuturistic Society, this exposition showed creations by self-taught artists from Sweden, Norway and Finland. Some of these artists also created an art environment.

Here is a small impression of what the expo looked liked.


The picture below shows singular architecture by Swedish Jan-Erik Svennberg, who for many years has been active in making 1:10 models of mosques. 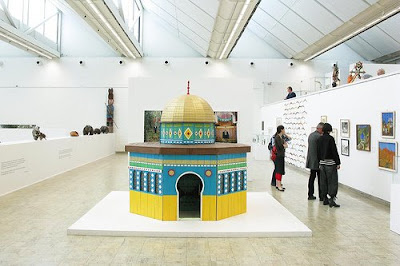 The next picture, the man in the blue jacket, is a self-portrait created by Helmer Jarl, also from Sweden. 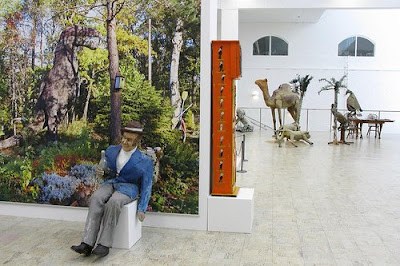 In the background there are some sculptures of animals, made by Alpo Koivumäki. from Finland.

The next picture gives a closer view. 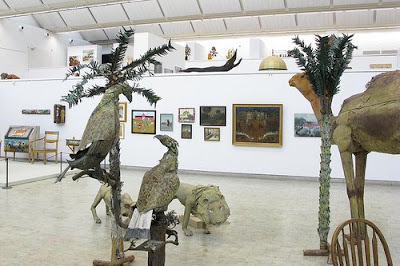 On the picture of the entrance (top) one can see a sculpture that was exposed on the square on front of the museum. It depicts a dragon and was made by the Swedish outsider artist Leif Andersson from the city of Arjang.


The exposition highlighted creations by self-taught artists from Sweden, Finland and Norway, a number of whom were rather unknown.

In July and August 2009 the exposition could be visited in Norway (Bomuldsfabriken Kunsthall, Arendal) and from January till March 2010 it was in Vaasa, Finland.

The same exposition, with some works added and renamed Eljest (Other),in the summer of 2010
(June 12-August 15) could be seen in Stockholm's Liljevalchs Konsthal (the municipal museum)

Documentation
* Sinziana Ravini "Outside and inside", article (March 2011) in Aftonblattet (Sweden), with some pictures by Veli Grano