Tazones, a small community of some 300 inhabitants on the north coast of Spain (Asturias area) has an abundantly shell decorated house, created by José Ramòn Gallego Rebollar.
Life and works

His name appears in an inscription on the frontispiece of the the decoration, just under the flowerpots at the central window. The inscription also says that Gallego Rebollar began making the decoration in 1985 and that he finished it in 2005.

When I wrote the original version of this note in 2009, I could not find other data about Gallego. However, some years later the new SPACES website about art environments published an article about this shell decorated house. which has all relevant biographical information.


Apart from the inscription, there are some other statements within the creation, one of them reading Bendita es la Reine de nuestras montañas que tiene par trono Isa Cuna de España (Blessed be the queen of our mountains, who is on here throne, Isa Cuna de España). Another statement relates to Real Madrid, the famous Spanish football-club.

Then one of the bigger shells has a text bringing to memory the presumed historical event of the landing by ship in 1517 of Charles V, already emperor of a big part of Europe and then on his way to become king of Spain, Carlos I. Official historiography does not confirm that this landing actually happened, but in Tazones the event is celebrated by the population every year, and why not?

One more gadget: there is a centolla (kind of a sea crab) in between the decoration of shells, that is quietly smoking a cigar.


Tazones would be worth to pay a visit to, not just because of the shell decorated house, but also because of the seafood provided in the local restaurants.
Situation late 2021 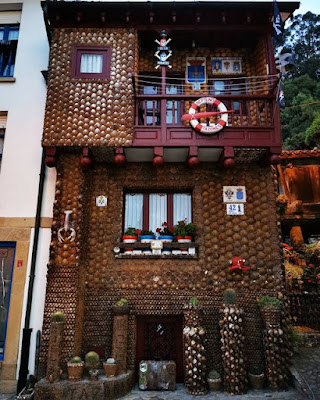 The picture above, made in October 2021 by Tiramisu Bootfighter, who traveled through Spain in the context of his project La Valise, Galerie Ambulante, shows that the decoration at that time still was in good condition. The facade is now fully decorated with shells
Documentation
* Short review and a large series of pictures on touristic website All-Andorra
* Article by Jo Farb Hernandez on SPACES website
Video
* Scenes (2011) of the site on the North Spain trip video by Serflac (YouTube, starts at 10.44, cannot be embedded here)