Located in a house on a regular street in East Dulwich, a suburb of London, the mosaic creation pictured above is part of a wealth of other creations that adorn the garden and ground floor of this house, which in this way has been transformed into a art environment, called The House of Dreams Museum
Life and works
The museum was created by Stephen Wright (born 1954), a stationary and textile designer, who took his life in a very different direction in the late 1990s.
He had watched Yarvis Cocker's TV series Journeys into the Outside (1999) and felt attracted to the world of outsider art, how outsider artists express their feelings and manage to create beautiful works of art, often using all sorts of ordinary and discarded materials. 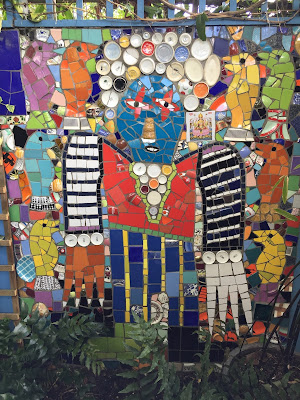 Inspired by this experience, Stephen Wright and his partner Donald Jones traveled through France to visit different art environments such as Raymond Isidore's Maison Picassiette, Robert Vasseur's Maison de la Vaiselle Cassée (The Broken Crockery House) and Le jardin aux coquillages (Shell garden) by Bodan Litnianski.
In 1999 they decided to transform their home and garden into an art environment.
The ground floor and garden of the house were embellished with mosaics, paper-mâché and cement constructions, compositions of found objects, decorated dolls, etc. 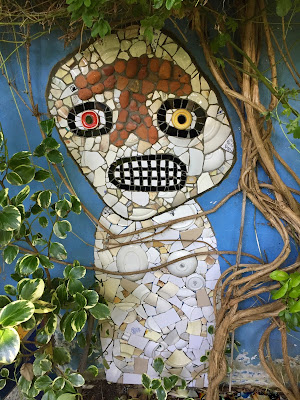 However, after working on the creation for a few years, Jones fell ill. He was admitted to hospital where he died after six months in intensive care.
And a little later Stephen Wright's parents also died. 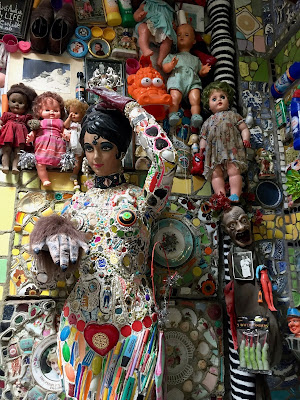 These tragic and emotional events left Stephen unable to continue making creations for some time.
After about a year, however, he went back to work on further development of the site, feeling that this could be done in response to loss. Wright's new partner, actor Michael Vaughan, whom he met in 2006, also encouraged him to keep going.
Death became a recurring theme, and references to the folk art of Mexico, South America and Asia appeared alongside the work of French outsider artists. The overall look of the site is bright and colorful.
It has a very personal character, which is also reflected in a number of personal statements on the walls. The House of Dreams museum is Stephen Wright's own world. 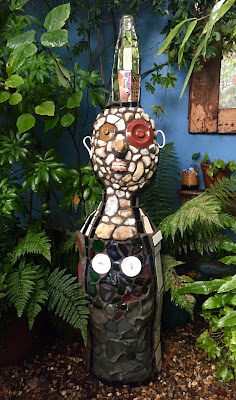 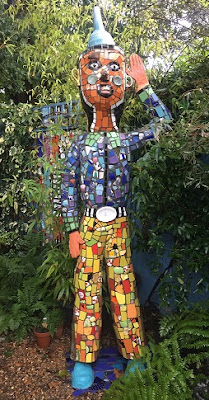 During the lockdown due to the Corona virus that hit the UK in 2020, Wright began creating black and white paintings of ghosts and monsters.
This led him to build new large-scale mosaic sculptures for the garden of the House of Dreams Museum, along with large-scale wall panels. The pictures above and below give an impression of the recent additions to the garden.
Stephen Wright is currently still working on a large-scale mosaic monster sculpture. 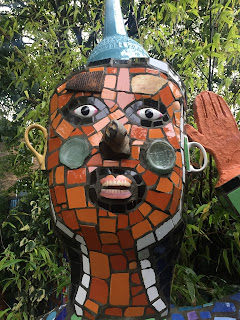 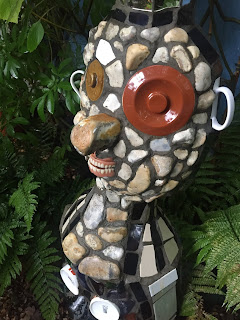 He has a passion for flea markets and when traveling abroad he likes to visit markets and rummage through trash and take home items such as old dolls or glass eyeballs.
And then, among the creations on display in the museum, there are items donated by people who have visited the site, often items that belonged to deceased relatives, finding a home in this way. 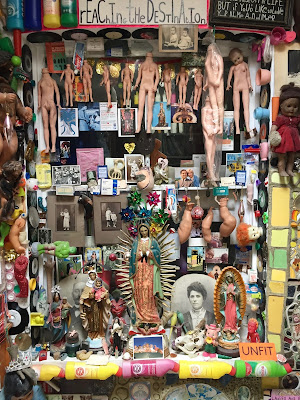 During the first years in which the site was established, its creators were reluctant to seek publicity.
However, in the course of the first decade of the new century, the art environment became better known.
This weblog published the first version of this post about the site in July 2009 and in September and November 2009 there was an exhibition of Wright's artworks in Milagros, a London company that sells all kinds of (handmade) Mexican products, followed in 2010 by an exhibition at The Last Tuesday Society and by the group exhibition Flashier en Trashier in the St Pancras Crypt in London. 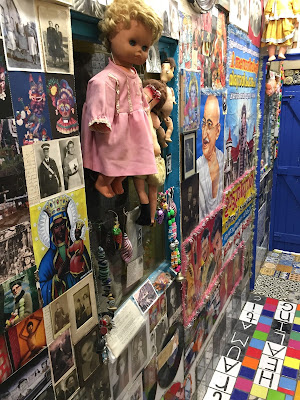 The museum is bequeathed to the National Trust of the United Kingdom, a heritage protection organization that takes care of the site when the creator is gone.
Documentation
* Stephen Wright's website
* In  OEE-texts the introduction to the July 2010 exhibit at the Last Tuesday Society as published on their Facebook page
* Kate Davey, "Stephen Wright's House of Dreams" (Raw Vision  nr 86, spring 2015)
* An article by Homa Khaleeli (January 2016) in newspaper The Guardian newspaper, presenting some creators of  art environments in the UK ( Robert Burns , Sue Kreitzman , Stephen Wright, Mary Rose Young en Kevin Duffy )
* An informative and well illustrated article by Sandra Lawrence in the Londonist (March 2016)
Videos
* Video (2013, Vimeo 5'01") on the website Majestic Disorder