These sculptures have been created by Longino Ayuso (1923-1990), a farmer who around 1970
began transforming the area around his farmhouse on the outskirts of the community into an art environment.

Ayuso has made most of the sculptures in situ, carving the granite rocks that abound in the area. It was his dream to create a harmonious constellation of the animal kingdom and nature. 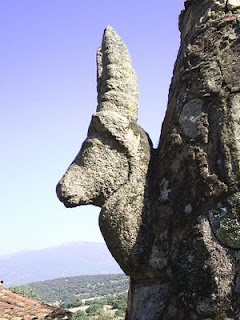 After Ayuso's death in 1990 the inheritors, who do not live in the area, have given the land into lease to a neighbouring farmer. This situation probably has continued for years, because in 2020 on a weblog a referral to the site was made.

Documentation
* The site got a scholarly review in: Jo Farb Hernandez, Singular Spaces. From the Eccentric to the Extraordinary in Spanish Art Environments, Seattle (Raw Vision, SPACES, San José State University), 2013. ISBN 978-0-615-78565-3. An abridged version is available on SPACES website.
* Website La Iglesuela with a variety of pictures
* Weblog Agualuz y Viento (November 2020) with a short referral to the site