This post ¹ is about a shell decorated house in the community of Rojales in the southeast of Spain, not far from the coast in the touristic area of Alicante

Manuel Fulleda Alcaraz (1933 - around 2018) as a young boy already had to go to work to sustain the family's budget. When older he had several jobs for which no schooling is necessary, such as working as laborer in the construction of regional railways and in vineyards in southern France.

He succeeded in saving enough money to buy -around 1974- a house in the community of Rojales, in these years still at the outset of touristic development.

When retired in 1992 and making a walk on the beach of the nearby coast, he got the idea to use shells as a convenient form of maintenance of the exterior walls of his property. So he collected loads of shells and began decorating an exterior wall.

It became a project that would keep Fulleda active for some twelve years.

He not only covered all exterior walls with shells, which he arranged in various decorative patterns, but he also decorated the external staircases, an interior room and the various rooftop terraces. 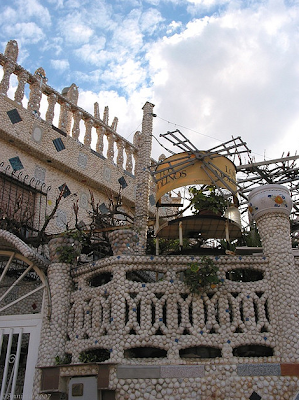 The local authorities had no problems with regard to the decorations.

The Casa de las Conchas became a tourist attraction (it is located near another attraction, the Caves at the Calle Cuevas del Rodeo). And Fulleda himself, apart from being proud of his artistic creation, was satisfied by the level of protection of the walls the shells offer.

Fulleda has passed away, the house is for sale

On a touristic website it has been reported that Fulleda has passed away. The year in which this happened is not specified and official sources have no relevant info.

TripAdvisor has messages dating from 2016 that show that in that year the site still could be visited. Because such messages are subsequently interrupted, it can be assumed that Fulleda died after 2016.
The house was for sale, but it is not clear if it got a new owner.

note
¹ when in 2009 I wrote the first version of this post, I could not trace biographical data; the data in this revised text, rely upon Jo Farb Hernandez' book (2013), referred to in the documentation.
first published July 2009, last revised December 2019