Federico Diaz Falcon, Monumento a los ojos/Monument for the eyes


In terms of art environments this Monument for the eyes ranks as a singular architecture.

Located along a the main road M 215, some 1.7 km south of Ambite, a community which is part of Madrid, the Monument for the eyes is an assembly of three identical structures, the one in the middle being higher than the two flanking ones. The three structures resemble the facade of a church and all are topped with kind of a small bell tower.

The walls of this ensemble have been fully covered with plates, about 250 in total, which represent in text and picture all kind of themes that can be associated with eyes, partly of a universal character, partly reflecting actualities of the 1960s.

Diaz Falcon was a respected inhabitant of the community of Ambite, who had inherited enough money to live independently, writing texts, travelling the world and thinking about realizing this monument. 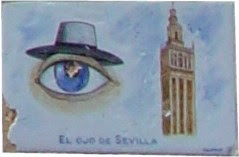 When around 1969 the creation was finished, it was located in a garden which was surrounded by a wooden palisade. This plot of land must have been private property, probably owned by Diaz Falcon (or his family), because it has been  reported that the community talked with his heirs about a transferal of the property rights of the grounds where the monument is located.

Today the palisade is gone, and the site has a rather public appearance.

Diaz Falcon was the auctor intellectualis of the monument, but he hasn't made it himself.

A report by the Alpha Grupo, published in march 2010, says that he commissioned the project and that the structure as such was built by Angel Lopez Fernandez, a master builder who has constructed many more buildings in the region.

Many people have wondered why Diaz Falcon happened to be fascinated by eyes and what kind of message he had for the onlookers. A variety of websites discuss the site in a context of mystery, demonic powers and the like.

Not surprisingly, with regard to the themes of inspiration and meaning there are no definite answers, but as far as I understand, Diaz Falcon just wanted to present the community with a nice monument at the entrance of the village, but then with as central theme a topic that interested him in a philosophic way, namely the different aspects associated with the eye, and that through the centuries

The monument is in decay

After Diaz Falcon died in 1982 (and was buried in or around Ambite) the monument was not very well maintained and a number of plates with texts have disappeared.