Enni Id (1904-1992) was born in the rural community of Padasjoki in Finland. At age twenty she run away from home to stay with an aunt who lived in Helsinki and had a small company that manufactured clothing.

Enni Id liked to sketch and paint, but during the time she lived in marriage her new husband would not tolerate this. He would use her paintings to isolate the walls and the ceiling of their home, the painted side out of sight. 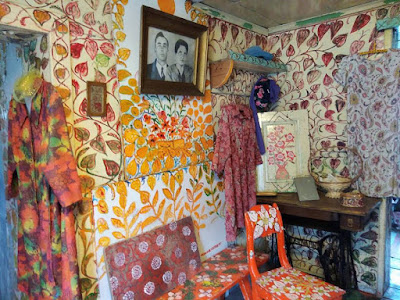 This second marriage lasted for over 25 years and when her husband died in 1966, Enni Id, who was in her early sixties, felt happy she could indulge her passion for painting.

It became kind of an outburst.

She covered all walls and floors of the cabin, but also the furniture and other domestic objects with decorations and images, mainly of flowers, plants and cats. The ceilings remained untouched to maintain a connection with the sky above. 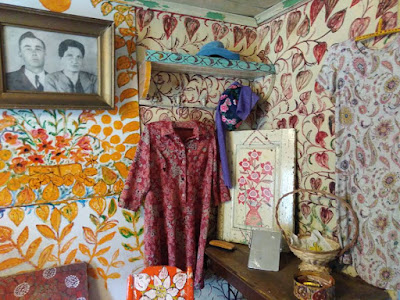 This weblog has other examples of women who at a later age began decorating their house, such as Bonaria Manca from Italy and Polina Rayko from Ukraine (see also the documentation). 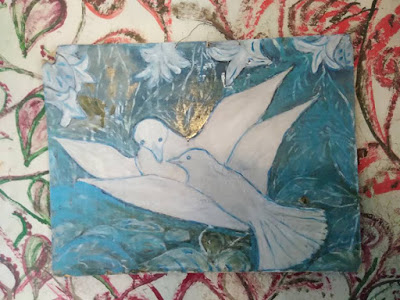 Enni Id also made paintings on canvas, her favorite themes being landscapes, angels, devils, animals and elements from the Cudgel War.


Her paintings have been shown in a 1973 exposition of naive art in the Kunsthalle in Helsinki.

This exhibition and illustrated articles in magazines and newspapers gave her at age seventy some reputation in Finland. 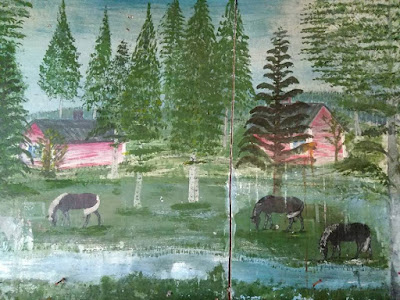 Her art was also represented in the 2005 outsider art exposition In another world in the Kiasma museum in Helsinki.


Many of Enni Id's paintings currently are in private collections.

The house has been renovated

Enni Id's house was legated to the community and it currently is cared for by the local village action association Kellosalmi-Seitniemi-Virmaila kyläyhdistys ry.

The property needed renovation and this has been done with funds from the Päijänne-Leader association, a regional association that promotes developments in this rural area.

The roof has been renewed and the exterior walls have been repainted. Currently the cottage can be visited (on Sundays in summer).


In 2015 the Kokkola ITE-museum (outsider art museum) in Finland, had an exposition about some Finnish outsider artists who abundantly decorated their home, among whom Enni Id. The picture below shows how she was featured. 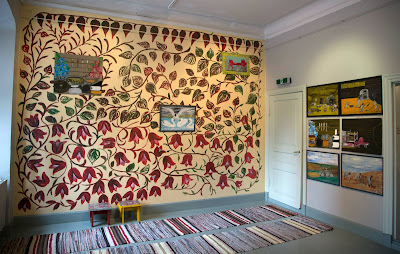 The permanent collection of the ITE-museum includes a number of works by Enni Id.