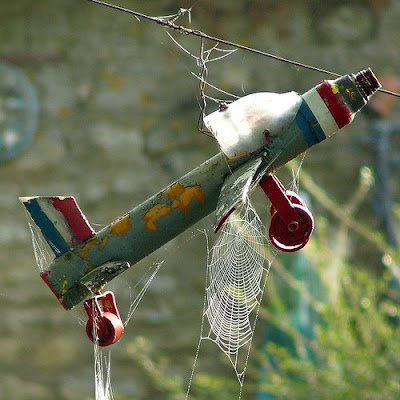 this picture and the next one (sept 2008) courtesy
of Marcello14, (Flickr photostream)

I dedicate this one to the memory of Louis Tourquetil (1916-??), who lived in the little community of Sainte-Honorine-des-Perles on the Normand coast of France, very close to Arromanches and the other beaches where in 1944 the invasion took place. 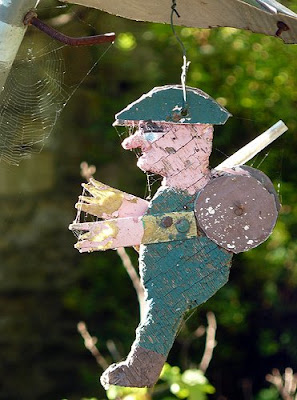 These pictures show a model of a warplane and a (in my view very moving) wooden representation of a soldier coming down with his parachute.

Tourquetil made these creations as a tribute to the troops that landed in 1944 in Normandy to free France, Belgium, Luxembourg and the Netherlands from the German occupation. June 2009 it was a united Europe that could pay tribute to the 65th anniversary of the invasion.

A reader of this blog has commented that Tourquetil was the Tonton Louis (Uncle Louis) of his family, who with his eccentricity endowed his family with moments of laughter and unforgettable crazy acts.

Annex to his house he had a workshop where he made his creations. 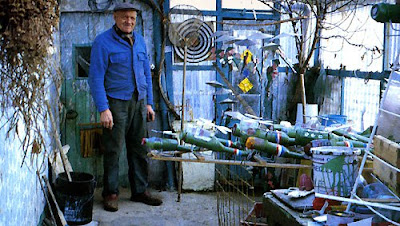 After he had died (maybe around 1998) this workshop was left unattended for and it was vandalised, until eventually in 2002 the whole property was pulled down to be replaced by newly build houses. 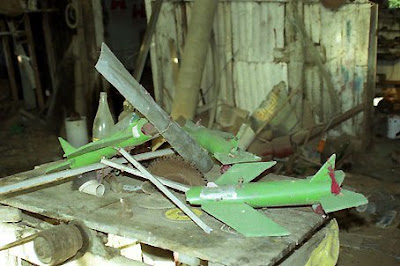 Not much has been left of Tourquetil's creations. The plane and the soldier pictured in this post, are in the collection of the Musée-jardin de la Luna Rossa in Caen, where they are exposed. And the Lille Art Museum also has some planes and parachutists in its collection

That probably is all that is left from Louis Tourquetil's creative activity.