The picture above shows what just looks like an ordinary house.

It is located in a small community in Italy, to the north of the city of Torino and there is something very special about it: underneath the house, expanding into the adjacent mountain, a vast decorated complex of nine rooms has been dugged out, currently named the Temples of Humankind, but also known as Damanhur.

How the site came into being

The layout of the site and its decoration are based upon a spiritual philosophy developed by the creator of the site, Oberto Airaudi, who was born in 1950 in Balongero, near Torino (Turin) in Italy.

It is said that as a young boy Airaudi already was spiritually inspired and had dreams and visions of the creation of a beautiful temple.

Around 1975 he could acquire the house and the surrounding terrain and around the same time he also founded a spiritual community.

In August 1978 Airaudi, together with a number of friends, started the dugout project, just using simple utensils and working with their own hands. They did this without any permit from the local authorities and Airaudi (and everybody working with him) succeeded in keeping the works secret for about fourteen years.

In 1992 however, the police came along, and the subterranean works were discovered.

At that time it must have looked already very impressive: a vast complex of big halls, corridors, a dome, statues, walls and ceilings decorated with mosaic and glass constructions, the whole reflecting spiritual conceptions.

The authorities considered to demolish the creation, but after protests from artists and architects, a decision was omitted.and the Temple continued it's existence without any governmental interference.

Today the development of the complex is still going on, however its has become a rather professional project. The official Temples website has all details about the ideas behind the creation and it describes the ambitious plans for the future. 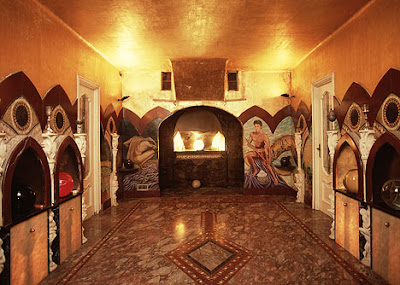 The spiritual community of Damanhur also has grown during all the years and it currently includes some thousands people. It has its own constitution, money, schools and newspaper, and in general is self-sufficient. This weblog does not deal with these aspects, but if you are interested, you'll find all kind of information and views about the community on their website.

More pictures
* A large collection of pictures on Flickr
* A video by Atlas Obscura on YouTube (3'05", December 2015, narrative in English)