This art environment has been created in and around the house of Vitaliy Trybushnyy, a psychiatrist who lives in the city of Kherson in Ukraine.

In the 1970s Trybushnyy was not a middle of the road personality. He had long hair and wore jeans and he told the police who wanted to correct his appearance, that the Constitution of the USSR did not forbid jeans and his kind of hair.

The April 9, 1989 tragedy when Soviet troops dispersed an anti-soviet demonstration in Tbilisi, Georgia, stimulated Trybushnyy to start collecting all kinds of material relating to the authoritarian aspects of the Soviet-Russian regime: books, pamphlets, paintings, busts, objets trouvés, and so on.

The next twenty years he enlarged his collection, arranging the items in an exposition in and around his place of living, which he named the Museum of Totalitarianism. 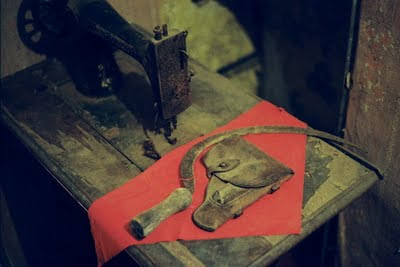 Although Vitaliy Trybushnyy had no artistic training at all, he managed to present the collection in an associative, artistic way, using the colours red and black as a leading decorative principle, manipulating pictures and symbols of Soviet-communism, as in above picture, and redecorating objects, like this bust of Lenin. 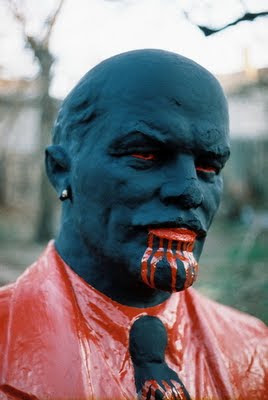 Ukraine, currently an independent state, has an official museum in its capital Kyiv about the period when the country was part of the USSR.

This art environment/museum in Kherson doesn't get much official attention, neither from politicians, historians or art critics. It is not mentioned in a list of museums in Ukraine.

Re-opened in a new setting in spring 2015

Documentation
* Polish art-magazine Kultura Enter in April 2009 published an article by Julia Kysla on this art environment (in Polish). OEE-texts has a translation into English of this article.
* Article (April 2015) on the website UNN news