Julio Basanta (1933-2018) was born in Zaragoza, Spain, in a family with ten children, all boys. He had a difficult childhood, also because of the civil war that raged in the 1930s. He got a job as a bricklayer and a mason. he married and the couple had five children, including four girls

On a plot of land in the community of Épila, in the neighborhood of Zaragoza, Basanta single-handedly constructed a weekend house, which got a rather special construction with three separate structures and a configuration of parts that look like a castle.

In the mid 1960s Basanta began transforming this summer house into an art environment, adding a variety of sculptures that mainly represented deities and demons.

His project was named La Casa de dios (House of God) or Las Castillicos de Épila (The small castles of Épila).
The plural refers to the fact that the house consists of a number of structures referred to as "small castles").
On the walls of the property there are texts which refer to religious themes, what could mean that Basanta was inspired by religious considerations when he began this project.

However, the scenes Basanta created are not gentle or mystical, but rather rude and terrifying. In a comment in a newspaper the creation has been denoted as not being art brut but rather art brutal.

Basanta's life had several tragic moments. His father left the family when he was very young, and he and the other children were placed in an orphanage.

In 1977 his brother Vincente, who was doing graffiti on a wall, was shot dead by the police, and later, in 2002 this also happened to his only son Moses. In both cases the circumstances surrounding the events remained unclear. An inscription on a wall (the yellow one below) recalls these events.

Considering that already in the mid 1960s Basanta was active in creating the Case de Dios, these events can only partly provide an explanation for the specific characteristics of the site. 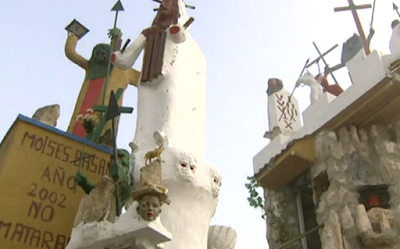 The sculptures got neglected

After Basanta died it was unclear what the future of this art environment would be.

In October 2019 a petition asked both the community of Épila and the regional authorities to help with funding to save the site for the future.

In May 2020 regional journal Heraldo reported that the condition of the sculptures had deteriorated due to the rain and winter cold. Apparently, the authorities hadn't taken any measures aimed at their preservation.
Good news in November 2021
In November 2021 a  Spanish newspaper reported that the site was bought by Jorge Labé, an inhabitant of Zaragoza. This gives good hope regarding the continued existence of this art environment.
Below is a photo of the site taken in October 2021. 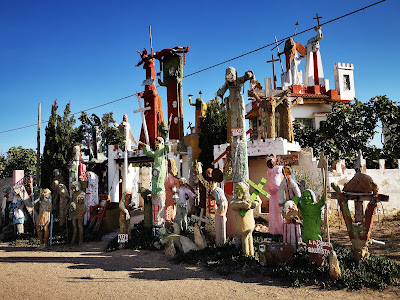 This  picture was made by Tiramisu Bootfighter, who traveled through Spain in the context of his project La Valise, Galerie Ambulante. It shows that the site at that time was still in relatively good condition.
Documentation
* Article (2009) on weblog Bajo Mi Boina
* Spanish TV in 2010 had a program about a number of Spanish outsider artists (Outsiders 2)
* The site got a scholarly review in: Jo Farb Hernandez, Singular Spaces. From the Eccentric to the Extraordinary in Spanish Art Environments, Seattle (Raw Vision, SPACES, San José State University), 2013. A short version was published on the website of SPACES
* Entry with pictures on España Bizarra, Tumblr May 2014
* A shortened version of a lecture (September 2019, Zaragoza, Spain) by Jo Farb Hernandez about art environments in general and Basanta's site in particular