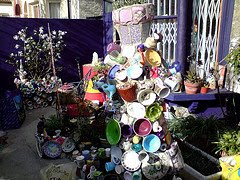 
The mosaic creation pictured above and below, is located in the front garden of a house in East Dulwich, a suburb of London, United Kingdom. 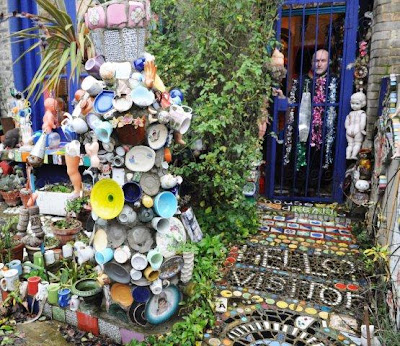 Stephen Wright (1954), a stationary and textile designer, gave his life in the late 1990's quite another direction.

He had watched Yarvis Cocker's tv series Journeys into the outside (1999) and became quite interested in the world of outsider art, how outsider artists give expression to their feelings and succeed in creating wonderful constructions, often just by using all kinds of ordinary and discarded materials. 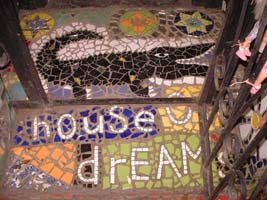 In the 1990's Wright paid a number of visits to France and he probably was impressed by the work of Bodan Litnianski, whom he has met personally.The colorful column decorated with cups and plates, pictured below, reminds of Litnianski's decorated columns, although Wright unmistakable gave it his own twist. 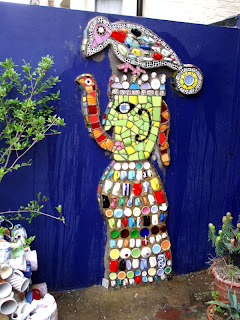 this picture, and the next two
courtesy of Stephen Wright

In 1999 Wright decided to transform his house into a museum of dreams.

Since he started this project the ground floor and the garden of the house gradually have been transformed into a very colorful art environment, made up of large scale mosaics, constructions of paper mache and cement, compositions of found objects, decorated dolls, etc. 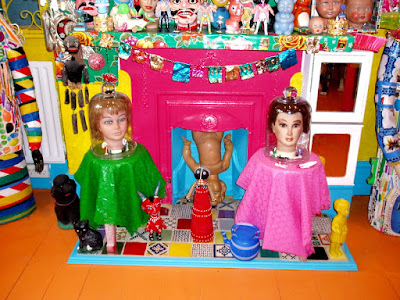 One will note referrals to the folk art of Mexico, South America and Asia. Although death is a recurrent theme in Stephen Wright's art, the emanation of the site in general is bright and colorful. 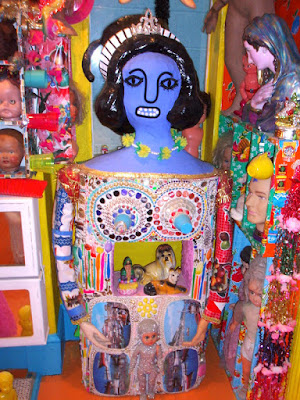 The work of french outsider artists such as Picassiette, Vasseur and Litnianski originally may have been a source of inspiration, currently Stephen Wright's art environment has a very personal character, which is also reflected in a number of personal statements written down on the walls. The house of dreams museum is his own world.

The Museum has been bequeathed to the UK's National Trust. an organisation in the field of heritage protection that will take care of the site when its creator is no longer with us.

Expositions
* in 2003 and 2004 expositions in the Halle Saint Pierre in Paris.
* in september and november 2009 an exposition in Milagros, a London firm selling all kinds of (handmade) Mexican products 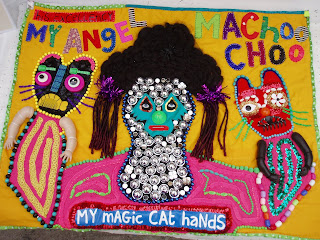