In October 2012 the Crypt of the St Pancras Church in London had the Dare to Wear exhibition, a colorful manifestation of visionary artists, who explore adornment through all kinds of media: paintings, sculptures, installations, dolls, masks, assemblages...

The exposition was as colorful as its curator and her artwork: Sue Kreitzman, outsider artist from East London.

Born in the USA, Sue Kreitzman began her career as a school teacher, working in various cities, experiencing in the late sixties the integration of schools in Georgia, where she was the first white teacher in a black school. On maternity leave in 1972 because of the birth of her son, she began experimenting with cooking, with the result that she developed a passion for food and never returned to her teaching job.

At the request of a New York publisher she wrote a cookbook, the first of a series of twenty-seven books about cooking and food she wrote thereafter. Food had become her passion and she shared her views in articles for newspapers and magazines, did reviews of restaurants, worked at a cookery school and had cooking shows on TV....

This food passion continued after the Kreitzman family in the mid 1980s settled in East London, Sue's favorite place to live.

Then, in 1998, something very special happened. Editing her 27th cooking book, Sue spontaneously made a drawing of a mermaid, which to her own idea happened out of her control. Never having done artwork before, she began compulsively making drawings.

It took her (and her family and friends) some time to realise that now art had become her passion and that in her early sixties she might have become an outsider artist.

Gathering all her courage, as she says on her website, Sue applied to participate in the 2005 Raw Art Festival in Islington, a borough in Greater London. She was admitted, experienced support and appreciation and met other older female artists.

When these women united themselves under the banner of WOW, the Wild Old Women, London no longer would remain the same....

Since Sue Kreitzman became an outsider artist and used her home as a studio, the interior of the house has become fully equipped with her paintings, creative constructions, decorated objects, assemblages, collected objects, various kinds of detritus, all very colorful, altogether so much "stuff" that one hardly can see where the floor ends and where the walls begin.

As she says in an interview on Brian Cormack Carr's weblog (February 2012): "All this art and I are in a constant, healing dialogue, but I do need a little room left over to cook, eat, and sleep! I actually bought the place next door, and doubled my space, but the new space filled up pretty fast"


Sue Kreitzman's painted artwork is passionate, inspired by primitive religions and tribal art, it depicts female themes, goddesses and has mystical references, In her assemblages and memory jugs she uses dolls and small mannequins, which she embellishes and decorates with glittering items, feathers, jewelry...

Like other outsider artists Sue uses social media to communicate about her work.

Early 2017 she participated in the project of the young photographer Ale Sandra Souls in a box, in which she portrays people in their interior, a series published on Tumbler. The entry about Sue Kreitzman also has a note written by Sue herself on the relation of her art and the arrangement of her house, a note she concludes as follows: "Always remember: kitsch can be spiritual. Minimalism is scary. Beige might kill you. Creative collections are the glue that hold our life together and tells our story to the world. I am the art and the art is me. Life is art, art is life. There is no separation".

Curated by Sue Kreitzman, the Wild Old Women end 2008 had an exposition in London based Novas Gallery, where fourteen self-taught older female artists presented their works, thrilling of color and expression.

Then, in 2010,  the crypt of the St Pancras Church on Euston Road had the exhibition Flashier and Trashier, nine outsider artists, "an extravaganza of all things kitsch", discarded objects being transformed into works of art, this time also some London male artists being present (like Stephen Wright) 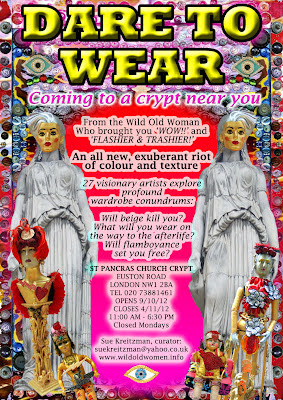 In 2012 (October 9-November 4), once more in the Crypt, we had the Dare to Wear exhibition, this edition with 27 visionary artists, including some male and also some young artists, but anyway a wild bunch.

In this exhibition it was all about adornment, an "exuberant riot of color and texture".

Was it about fashion? Vogue magazine announced the exhibition, remarking that Sue Kreitzman and her wild ones "dare the diktat of fashion". I guess so. Wow !

In line with the Dare to Wear concept Sue Kreitzman lately is actively involved with a group of fashionistas, women who propagate growing old with verve. Take a look at the weblog Idiosyncratic Fashionistas.