Vic-Fezensac is a community of some 3700 inhabitants in the Midi-Pyrénées area in the south of France, west of Toulouse. It is culturally known because of its Tempo Latino Festival (three days in summer) and it is on it's way to become famous because of its Musée de l'Artiste (four days, every week).

Born in Marseille in 1970, Cathérine Moreno in accordance with her parents wish, did a study to become an engineer in mechanical systems, to realize after some years that her real aim in life was to be a visual artist.
So she left the world of technology, did a basic course in restoration, worked for some time as a trainee with a sculptor and as a self-taught artist she began making artworks: first paintings, later on also sculptures.

Around 2002 Cathérine (also Cathy) settled in Vic-Fezensac. In November 2009 the house where she lived officially was opened as a museum. What happened in between?


Cathérine renovated the dilapidated house. A first project included the restyling of the exterior by adding color, a large mosaic, friezes and other decorative elements to the facade. Initially the neighbours reacted dismissive, but gradually their attitude became more sympathetic.

The interior of the three storey house also got a distinctive artistic character. As Cathy said: "J'avais besoin d'extérioriser ce qu'il y a en moi" (I needed to exteriorize what is in me)

So, the interior has an overwhelming, bewildering abundance of Cathy's artwork. One will see mosaics on the floors,  there are many dozens of her paintings around that depict the Christ, realistic portraits of people, naturalistic scenes of life in the countryside and the like.
And then there are large and small sculptures and busts of all kinds of people. One sees painted glassware encased in molded cement. She made frescoes on the walls, constructed arcades, ornaments, decorated pillars and she arranged  found objects and utensils as used on the farm in former days.......

It's an art environment, an expressive artistic display of recuperated items and artistic creations, a tribute to tradition and traditional art, which will evoke all kind of emotions in everyone visiting the place. Cathy wants to share these emotions with others, all those who are curieux de la vie (curious about life)....

In this way in 2009 her house became a museum indeed.

The house has a variety of special features. On the first floor Cathy has realized a chapel.
It has a mosaic fresco within kind of a dome which has circular decorations, the scene depicting the Christ with a lamb and Virgin Mary.

The chapel is meant to be consistent with her paintings of the Christ. It has no specific religious connotation, but refers in general to purity and humanism.


Cathérine has been making stand alone creations too, like she made a decorated fountain,
a decorated well, a drinker for birds, a couch and other objects. As basic material for her
structural creations, like the chapel and the boudoir, Cathy, respecting tradition, uses a mixture
of ground and straw, as was done in rural areas some two, three hundred years ago.


Making these constructions is an ongoing affair. Above picture depicts the boudoir when under
construction (2012).

The next picture gives an impression of a vault, combined with paintings and a sculpture 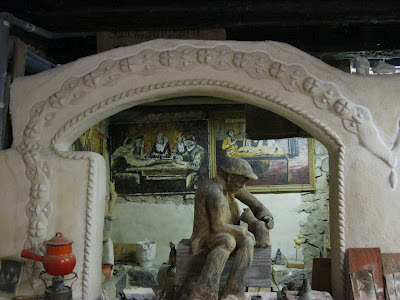 The third floor has a dining room, an interior garden and a bird cage. From the top of the house one has a lovely view of the surrounding environment.

Visitors of the museum will be offered a guided tour, that starts at the somewhat dark ground floor, to ascend to the top floor, which is light and airy.

In the course of 2013 Cathy has fully decorated the facade on the left side of the house (as seen from the main street). It now looks as depicted in the picture below.

Since 2016 the house also has a B&B facility with two decorated guestrooms. It's also possible to make a reservation to enjoy a dinner (reservations via the website) 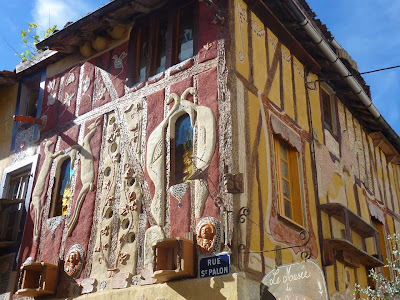