Väinö Oja (b. 1930), a driver of earth-moving machines, around 2000, so in his early seventies, began making wooden sculptures he displayed in the garden around his house in Paimio, Finland.

Many Finnish do-it-yourselvers have a certain preference for handling the chainsaw to produce a bear to adorn their house's entry ramp.

But although Väinö Oja likes sculpting bears with a chainsaw, the works he has made the last ten, twelve years are diverse, like he has depicted many birds and other kinds of animals, but also various types of personalities.

He is a fast and prolific worker. 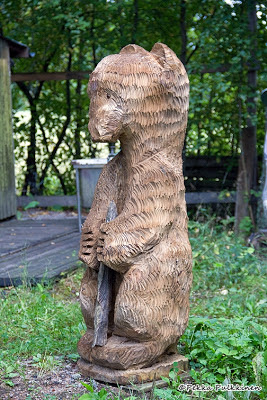 The area around his house has become a major sculpture garden and Väinö Oja -to his own surprise- has become an esteemed representative of contemporary Finnish folk art, his creations being exhibited at home and abroad (like Budapest 2004, Rotterdam 2011, Moscow 2011). 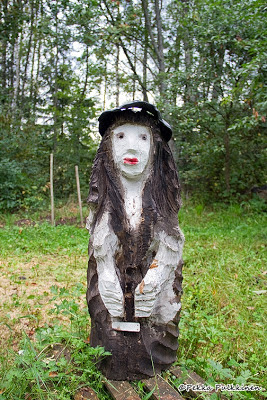 Oja coats his wooden sculptures with a mixture of tar and petrol to protect them from effects of the weather, and a special characteristic is that his female representations will partially be whitened.

They are rather impressive, these ladies, with a special beauty which occasionally is emphasized by specific details such as red lips. 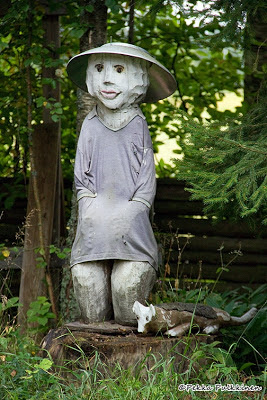 Sculpting birds and other animals Väinö Oja often departs from the form he already sees as present in the raw material, doing what so many sculptors say they do, that is freeing the item from its casing. 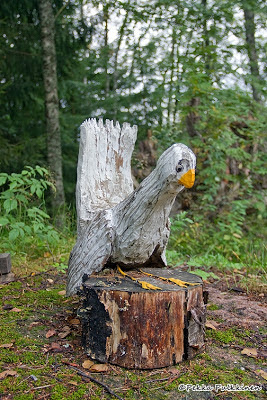 The community of Paimio in 2007 has recognized the merits of its citizen Oja Väinö by rewarding him with a medal.