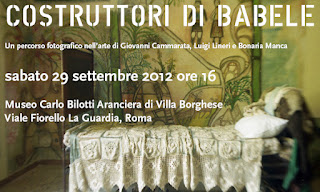 From September 30 till October 14, 2012, the Museo Carlo Bilotti in Rome had an exposition showing the works of three Italian creators of outsider environments.

The short exposition, entitled Costruttori di Babele (Builders of Babel), was dedicated to:

Giovanni Cammarata (1914-2002), photo's made in 1989 by Alberto Ferrero of Cammarata's Casa del Cavaliere, a house and garden with mosaic decorations, sculptures and ornaments, in an industrial area of Messina (Sicily), in part demolished after Cammarata died in 2002;

Luigi Lineri (b. 1937),  photo's made in 2010 by Rodolfo Hernandez of Lineri's Santuario dei sassi (Sanctuary of stones), a creatively and artistically arranged collection of stones Lineri in the course of many years passionately has brought together, wandering through the bed of the Adige river nearby Zevio (Veneto)

Bonaria Manca (b. 1925), photo's made by Salvatore Bongiorno of Manca's frescoe decorated interior and her other visual art.

Curated by Roberta Trapani (with contributions by Rosella Faraglia and Dominque Queloz) the exposition is one in a series of manifestations following the publication of the book Costruttori di Babele (2011), edited by Gabriele Mina.

It can be seen as a sign that in Italy interest in art environments is growing.