Quatre-Champs is a small community of some 200 inhabitants in the Ardennes area, France, north west of the city of Reims.

An art environment located here, the Jardin des deux mondes (Garden of the two worlds), created by Gérald Finot (b. 1954), around 2016 was significantly damaged due to a severe storm.

The history of its origin is quite interesting.

Finot had an alternate life, hitting French, Italian and Spanish roads as a Jack Kerouac, earning money by performing as a singer of French chansons at the guitar, but also by working as a joiner and a car mechanic, his latest job, he did for some twenty years.

In the 1990s Finot decided to settle himself as an (autodidact) artist, occasionally doing singing acts in pubs in towns around. 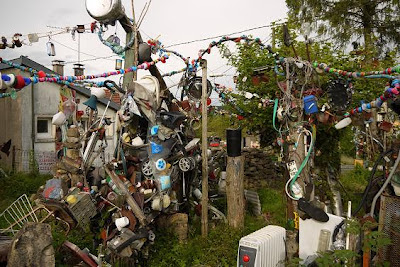 His main creative effort went into making vertical sculptural structures from discarded items found along the road or gathered on the garbage dump. These structures, displayed in the garden of his house in Quatre-Champs, have gradually transformed  the site into an art environment, he named "Garden of the two worlds".

The concept of "two worlds" may have various meanings, referring for example to "literature" and "music", two areas of art Finot is very fond of, or it might refer to "the real" versus "the imaginary", what in the real world is just material to discard, in his hands becomes an object of imagination..

His assembled vertical constructions, often provided with panels with literary quotes, which had such names as "the house of the fairies", "the fairground" or "walking man".... By the exuberant use of found objects in vertical structures, there was some similarity with Bodan Litnianski, but then Finot's handling of large components, like bikes and refrigerators, and the association of the sculptures with literary and musical themes, gave the constructs their own character. 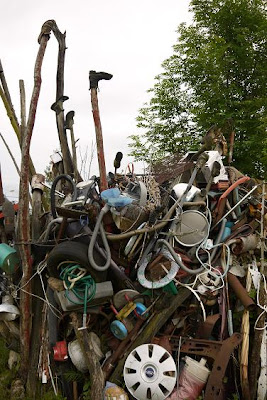 Travelling through France, Finot may have visited many art environments, as was shown by the many signs in the garden which refer to for example Chomo, Pierre Avezard or Raymond Moralès. In this way Finot's art environment had links with and was inspired by the world of French outsider art, with the world of classic French prose and poetry, and with the musical tradition of the French chanson....

Finot apparently has had the energy to renovate the site, because in 2019 a regional newspaper had an article about it (only partly available).
Documentation/more pictures
* Article on SPACES website (2012)
* Until recently only the regional press had articles about this art environment (l'Union of August 2009 and  l'Union of August 2010, in French)
* In 2012 the site has got publicity at the national level, when Sophie Lepetit wrote about it in her weblog les grigris de Sophie (with a lot of pictures).