Pyhäranta is a Finnish community of some 2000 inhabitants in the province of Western Finland, part of the Southwest Finland region.

Arja Alhoranta was born in 1937 as the youngest of a farmers family living in the rural part of the community. Her father died when she was a year and a half old. Soon also world war II broke out, and the family had to live rather modestly.

As a result, Arja Alhoranta had to start working at a rather young age and was unable to obtain further training after her primary education.

She worked in the insurance business and in one of her other jobs she became familiar with working with concrete.

Doing domestic work at home made her realize that this type of work does not deliver anything lasting. This increased her motivation to make sculptures, where her experience with concrete came in handy.

So Arja Alhoranta developed into a non-professional artist of allure, with the ability to turn some cheap material into something beautiful, such as the horse on her right side in the first picture.

This horse is one of the many creations she made by just applying concrete to a model made from simple iron wire. 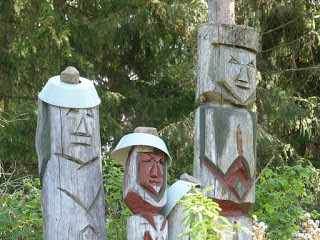 Her favourite is the elk. Altogether she made eight sculptures of elks and six of horses.

But she also has created penguins, dogs, swans, other birds......

And she also made wooden creations, as in above picture, by manipulating big tree stumps with a chain saw, in this way producing large totems.

Her work is displayed in the wooded area around her house in Ihode, a hamlet of Pyhäranta. 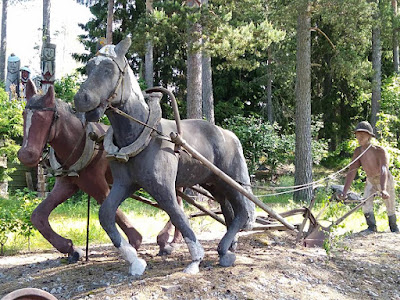 Arja Alhoranta also made a variety of small-scale items that are located indoors, such as painted murals, oil paintings, leather work and creations of porcelain.

Documentation
* article and pictures on the ITEnet website
* entries (August 2018) in the weblog of Sophie Lepetit: here and here
* article (August 2019) in regional newspaper Raumalainen