Some art environments made by non-professionals get a lot of publicity on the internet. Try "facteur Cheval" on Google and you will get a lot of hits. Of course, I also wrote about Cheval's unbelievable creation, but my special attention goes to the lesser known sites.

Apart from some articles in the local press, Joseph Duffour's creation has been presented only in the French magazine Zon`art, nr 8 (published early 2003). The article is by Jean-Michel Chesné, who gave me his friendly permission to draw on his material. And then in March 2010, I came into contact with a member of Duffour's family, who provided me with some more information ¹.

Joseph Duffour (1922-2021) was born in the community of Marin, near Thourou-les-Bains, in the Haute-Savoie department of France.

He had a job at the French railway organisation SNCF, from which he retired in 1977. 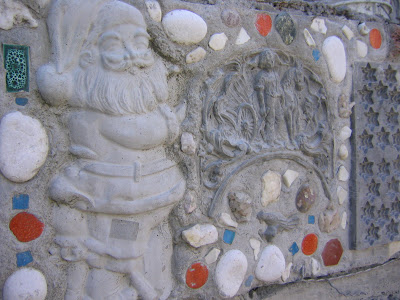 The family doesn't not know what inspired him when in 1963 Duffour began transforming the garden around his house in the community of Saint Gervais into an art environment.

It became a project that would keep him busy for the rest of his life, working many hours, sometimes day and night in what he himself called his "rocailles" ("rockies").

This resulted in a variety of constructions in concrete, decorated with shells, glass mosaic, small statues and all kind of recuperated materials.

Like Duffour's relative wrote me: "He uses any object that can inspire him, wherefrom he makes a concrete cast (doll, mask, sometimes even boxes of Nesquick) and he integrates these casts in concrete blocks, decorated with tiles, stones and shells, he has collected on the [...] coast". 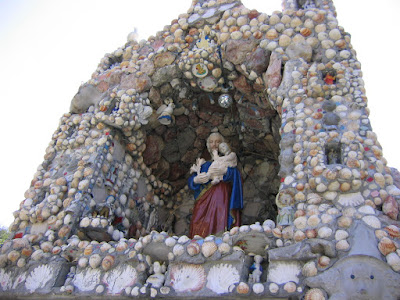 The rising structures include shrines with small sculptures of the virgin Mary and saints, among whom St Joseph.

The site has a small area provided with some benches, where one can sit quietly and can overview the beautiful landscape, watch the sunset and enjoy the majestic scenery of the French Alps. Duffour's place of living, Saint-Gervais, is a well-known skiing resort in the Mont Blanc-area in the Haute Savoie department.

Duffour apparently was not inspired by -or maybe even did not know about- other self-taught artists who made art environments: "Facteur Cheval? I do not know him, have never seen him in my life..." , he told Jean-Michel Chesné in 2003.

In 2005, however, he paid a visit to the Palais Ideal and remarked that he considered his own creation to be completely different from the one by Cheval, what obviously is a correct observation.

Joseph Duffour was a modest man. He has not made his creation to arouse interest from the general public, nor has he tried to get publicity, although the site got publicity in local/regional journals, like it also was shown on regional television.

The site is not open to the public and I will refrain from giving an address.

In his early nineties, Joseph Duffour had become too old to take care of his art environment. He died in 2021,at age 98.

note
¹The site is included in Bruno Montpied's inventory of French art environments Le gazouillis des éléphants, 2017, with a review that is based upon Chesné's article