The story is, that one day in a street of the Spanish city of Montoro a truck lost a load of shells. It would have been laying there for some time, if not someone living nearby had got the idea that this mess could be recuperated into an art environment.

Francisco del Rio Cuenca (1926-2010) was that man living nearby. It was 1960 and recuperating a truck load of shells became a lifetime project, that kept del Rio Cuenca active for the rest of his life.


He decorated the exterior walls of the house, all three patios and most of the interior, arranging the shells in colorful patterns, or assembling them into texts with information about who made this art environment and when. 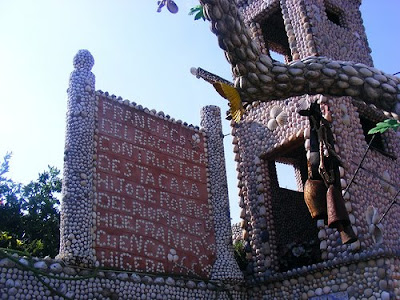 In 2008, when del Rio Cuenca was 82, he had reached the limits of what the house could bear in terms of decoration (reportedly he has processed some 115 million shells). But his creativity had no limits and the local authorities gave him permission to continue his decorative activity on a public plot in the vicinity of his home.

His creative activity was appreciated by the people of Montoro and there a lot of people around who supported the project by providing shells.

The house became a touristic must see, sometimes called the seventh wonder of Cordoba.

Francisco del Rio Cuenca died in 2010. A grandson took care of the house and welcomed visitors. As far a I know no decision by public authorities has been made about ensuring the future of the site.

Autumn 2013 the house was offered for sale by Del Rio Cuenca's heirs. However, it proved impossible to sell the house and now it is a tourist attraction that can be visited.
Interested parties should contact the local tourist office. 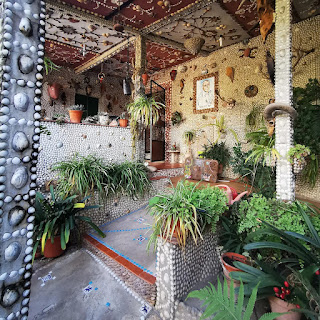 The picture above and the one below, made in November 2021 by Tiramisu Bootfighter, who traveled through Spain in the context of his project La Valise, Galerie Ambulante, show that the site at that time still was in good condition. 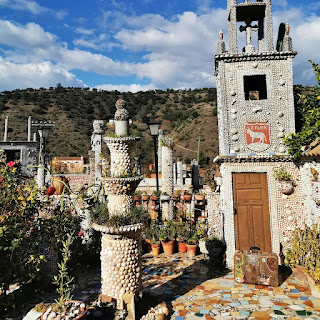 Documentation
* A scholarly review of the site in: Jo Farb Hernandez, Singular Spaces. From the Eccentric to the Extraordinary in Spanish Art Environments, Seattle (Raw Vision, SPACES, San José State University), 2013. A short version of this review is available on SPACES website
Video