It is not difficult to find pictures of this shell house, which is located in the community of Polperro along England's south-west coast. There are lots of them, on historic sites, websites of traders in postcards, weblogs of holidaymakers who do walking trips along the coastal path...


But factual data about this shell house are limited. 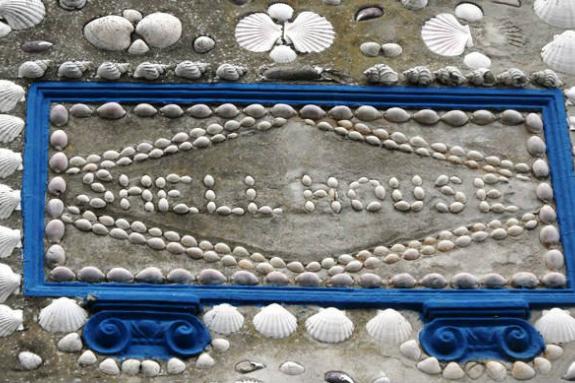 Life and works
When this post was first edited in August 2009, it was reported on the internet that this creation had been made by retired seaman Sam Puckey (1887-1965) and that it took him five years to complete the decoration, from 1937 until 1942.
The site now has a Facebook page, which mentions that Puckey was a naval man who collected many shells during his travels. It is also mentioned that the house was built in the midst of the 19th century as a fisherman's house. Maybe at that time or later it was owned by the Puckey family. In any case this family owned the house in the 1930s.
In 1986 the Shaw family was able to buy the top floor and in 2010 they bought the ground floor, after which a renovation was undertaken in which the upstairs and downstairs were merged into one house, that can be rented as a holiday home (sleeps 8).
An interesting detail in the decoration is a lighthouse as in above picture. This is Eddystone Lighthouse, on the dangerous Eddystone rocks, some 10 km south of the Devon coast.

Polperro is a nice place to visit, it has romantic streets, old houses along the Warren and a lively harbour. So from a touristic point of view there is all reason to be satisfied with the location of this shell house.

Sam Puckey
Shell House
The Warren, Polperro, South West England, UK
can be seen from the street
Posted by henk van es at 8:50 AM