We find ourselves in troglodyte country. Troglodytes are underground dwellings dugged out and lived in by man. The Saumur area in France boasts the largest concentration of these dwellings in Europe.

Located in that area, the community of Doué la Fontaine also has its number of troglodytes. There even is an art environment that is realised in a garden at the exterior of a troglodyte, a creation by Bernard Roux.

Roux was born in 1930 in Angers. He lived for some time in Saumur and when he got married in the early 1950s, the couple settled in Doué la Fontaine, a community not far from the Loire river in the Saumur area.

He had various jobs, such as butcher, carpenter and mason, and currently he is retired. 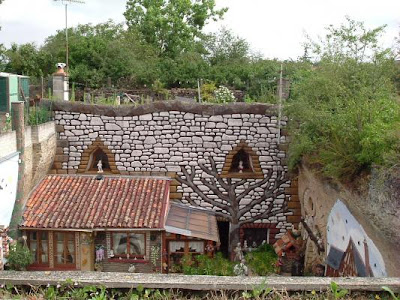 From 1957 on Roux has been active in transforming the garden of his house into an art environment, decorating the walls with frescoes and mosaics and making assemblages of dolls and dwarfs. 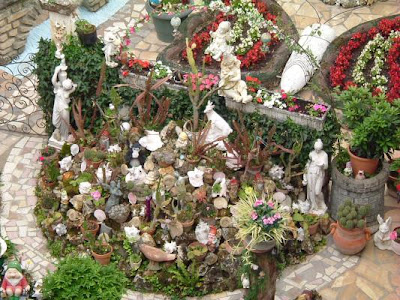 The frescoes and mosaics on the wall depict characteristic houses, churches and castles from various regions in France.
There are representations of people too, some of them inspired on Walt Disney characters. 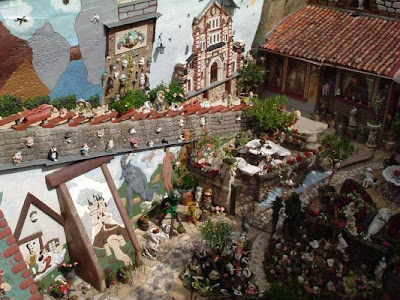 In his late 80s Roux would still welcome tourists who visit Doué la Fontaine if they like to look around in the garden. When he was in his early 90s his daughter and his grandson would take care of the maintenance of the premises.


Documentation
* Weblog of Sophie Lepetit August 20, 2011
* Article (August 2012) in weblog Animula Vagula
* A report by Jessica Straus, editor of the weblog Quirk, about her visit to troglodyte country and Roux's site in the spring of 2017
* Website Habitants-Paysagistes (Lille Art Museum), with photos by Francis David