Here we have Don Quichotte and Sancho Panzo en route in Brittany, France.

In the course of the years the garden of his house in the community of Riec-sur-Belon, not far from Pont Aven in Brittany, France, got a varied collection in which several man-sized sculptures in particular attracted the attention of passers-by.

Gourlet, like his father, was a carpenter from childhood on. During his professional life he also has done a lot of woodworking, for example by decorating wooden furniture. 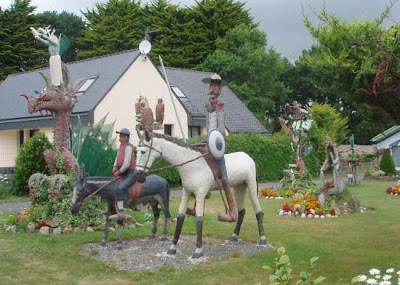 In his workshop Gourlet had a large collection of smaller sculptures of religious and Breton characters, and then some larger wooden creations also decorated other parts of the interior, as can be seen in the video referred to in the documentation. 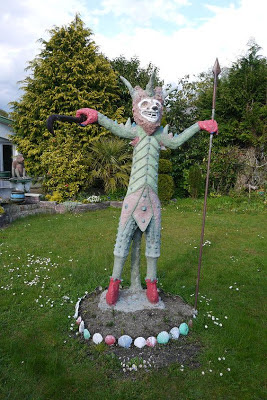 Asmodee
picture courtesy of Sophie Lepetit from her weblog

The garden got a varied collection of impressive sculptures, some in the form of small ensembles.
Besides Don Quichotte and Sancho Panzo there was a duo of Breton farmers, a big dragon, a tree with all kinds of animals on the branches and a sculpture of the biblical personality Asmodee.

At age 93 in March 2021 André Gourlet, who had become a respected citizen in his community, passed away,

* weblog of Sophie Lepetit: November 2011 article and pictures, details of the sculptures (2012), a new sculpture (2012), a series of pictures of the site as it was in 2017
* album with over forty pictures of the sculpture garden by Pascal Thibault on Flickr (members only)
* article by Jo Farb Hernandez on website SPACES
Video
* scenes of the site (2018) on the North France trip video by Serflac (YouTube, starts at 22.19, cannot be embedded here)