Juha Vanhanen (1957-2021) was born in Alavus, Finland. He began making white painted creative structures by using parts of agricultural and other machines, when he got kind of a religious vision, saying that recycling old materials and presenting them could be a good factor in evangelizing Christian belief.

Recycling, art, evangelizing, these three have guided Vanhanen in making his constructions.

It's not clear when he started making creations, but when this text was first published (2009), he obviously had been doing this for many years.
Vanhanen has become known in Finland and his creations have been exposed in a number of expositions (like next picture is from an outdoor exposition of Finnish sculptures) 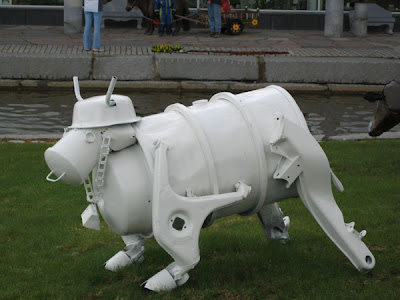 His white painted creations and structures were displayed around the house in Myllymaki where he lived, together with a collection of Mercedes automobiles.

Mercedes originally is a Spanish name, referring to the Virgin Mary, Maria de las Mercedes or Mother of Mercies. In Finnish mercy or grace is armo and so this environment is called armohuvilla (villa of grace). The next picture shows a creation made by Juha Vanhanen, that is not part of the art environment around his house.

It is an installation in Sweden that shows an ensemble of white painted plowshares, which refer to souls that fly to heaven.


This creation is situated on a field in Västerkvarn, in the surroundings of the city of Halstahammer (on the road from Strömsholm to Kolbäck), where Vanhanen happened to live for some time. The installation is a gift by Vanhanen to the people of Halstahammer.

Here is a quote from a comment Alberto Oliver made about this ensemble:

"The installation of the plowshares is superb. As a matter of fact, it needs no explanation to understand its feeling, a feeling of freedom, liberation and detachment, detachment from prison, after all, since from a religious point of view, the soul inhabits nothing but a prison of flesh".

Vanhanen made a comparable installation, this one exposed in Finland. It can be seen on the premises of the Finnish folk art museum in the community of Kaustinen.

Juha Vanhanen passed away in November 2021.
Documentation
* Note by Erkki Pirtola on  the website ITE NET
* Article and a series of photos (November 2018) on the weblog of Sophie Lepetit
* Memorial article by Minna Haveri on the MSL website
Juha Vanhanen
Armohuvilla
Myllymäki, Alavus, Southern Ostrobothnia, Western and Central Finland
Posted by henk van es at 9:59 PM