The old postcard pictured above shows a man decorating his house with shells.

Frederick Attrill (1839 - 1926 ), a fish seller by profession, made these shell decorations during the last ten years of his life, continuing this project until his death in 1926.

From the 1920s until the 1970s this art environment located in East Cowes on the Isle of Wight on England's south coast, was a popular place to visit. People who wanted to take a look didn't have to pay an entrance fee, but were supposed to buy some postcards with pictures of the site.

Nowadays these postcards are still on sale on the internet.

Here is another one: 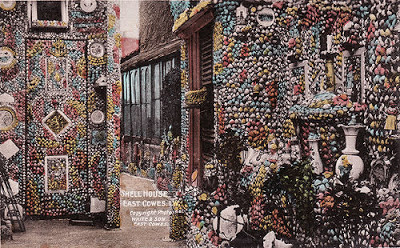 
In the early 1990s the decorations have been removed after the house was sold to new owners, who apparently were not happy with tourists intruding the property.

There is an amusing story related to this art environment. It says that when young Freddy in 1852 collected shells on the beach, his bucket was kicked by another boy. Freddy kicked back, not knowing that the other boy was prince Albert Edward, the son of Queen Victoria, who owned a holiday home -Osborne House- at the Isle of Wight.

When the queen heard about the incident, she praised Freddy because of his aplomb to defend his shells and (as the story goes) rewarded him with some money. The story goes on saying that this incident might be at the origin of Attrill's creative effort.

In memory of this beach incident, in 2009 a stone carving and plaque have been installed on Columbine Road, close to Attrill's place of living.