Life and works
Born in the community of Hirvensalmi, Finland, Ensio Tuppurainen (1924-2014) initially worked in a shop, but in 1955 he unexpectedly quit that job and went to live with wife and children in a remote place near a forest. Over the years, the couple had seven children.
Here he got a job as a forest worker until he was declared incapacitated by an illness at the age of 52.
With his wife and the three children still living at home, Tuppurainen moved to another house, the now vacant shop where he used to work in earlier years, which he had bought,
The former store of some 300 m² was located along the road to the Vekaranjärvi-garrison, a large military base near the community of Valkealan, in the south of Finland.

Here Tuppurainen began to decorate the large interior of the former shop with paintings of landscapes, people and other scenes.
He was also active in making sculptures, such as elks, horses and other animals, which he displayed around the former shop, where he also had his studio and gallery.
Tuppurainen used to refer to his site as Paradise, but in Finland it is also referred to as Jätkän Onnela (something like a guy's utopia)


He became known by the expressive statements he wrote down in a colorful way on posters he displayed at the outside of his house. 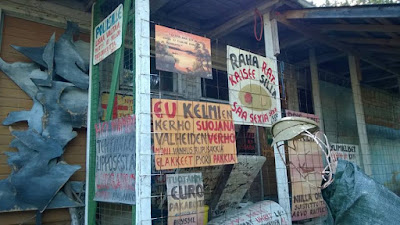 In these texts Tuppurainen commented on what he saw as social and political abuses, varying from EU-politics, the banking system and old age pensions, to environmental policy and the treatment of refugees. 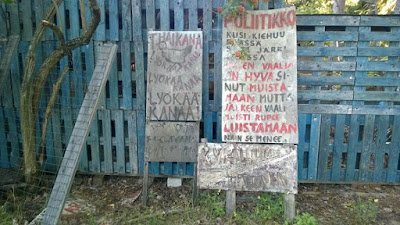 Actual situation
In September 2021, it was reported on Facebook that over a weekend a group of volunteers had refurbished the site that was in danger of falling into disrepair.

Documentation
* In 2022 friends of Tuppurainen's art environment published the website Jätkän Onnela, which has the story of life and works of Tuppurainen as already reported by Veli Granö in 2013 and an inventory of Tuppurainen's creations
* Entry about  Ensio Tuppurainen on the website ITE-taide
* Series of photos by Sophie Lepetit on her weblog
* Tuppurainen's work was represented in the 2005 exposition In Another World in the Kiasma Museum of Contemporary Art in Helsinki.
Video
* In 2012 Finnish photographer and author Erkki Pirtola made a video (YouTube, 19'29", uploaded December 2012) of then 88 year old Ensio Tuppurainen who talked about and showed his site. This Finnish spoken video gives a good impression of the variety of creations made by Tuppurainen, both all kinds of installations from recycled material and sculptures and pamphlets with social and political manifestations.

Email ThisBlogThis!Share to TwitterShare to FacebookShare to Pinterest
Labels: garden with varied sculptures, site with posters