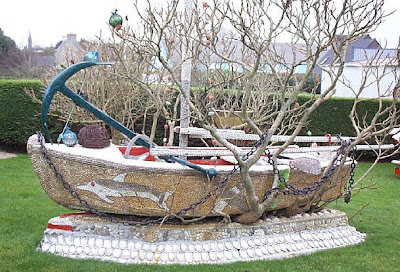 Plouescat is a seaside resort of some 3400 inhabitants along the coast of Finistère in Brittany, France.

François Bothorel, who lives in this community,  has made something special of his house. 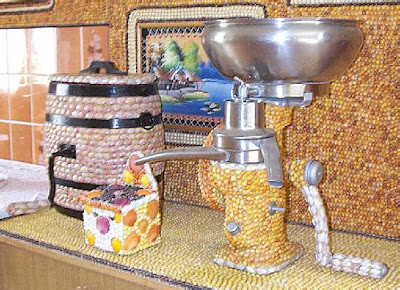 He has decorated its interior with shells he patiently collects on the local beaches. All walls have been decorated, but also many items that keep memories of local heritage alive.

For example, the shell decorated utensils on the picture above would be used in households to make butter: at the right there is kind of a centrifuge to separate milk and cream and at the left there is a device to transform the cream into the famous Breton butter (salted as preferred with salt from the salt cellar in between). 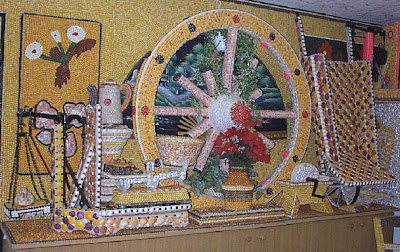 another exposition of utensils, a weighing machine,
a wheel from a chariot and a ?
(it's a wheelbarrow...see comments)

Bothorel also added shells to a number of machines that in former days were used on the farm, like the one in the next picture, a device to cut plants and other supplies to feed horses. 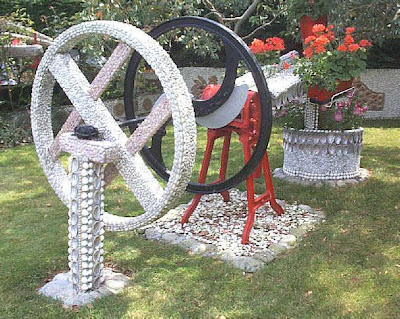 The first version of this post was published in November 2009. After that date, the internet had no new information about this site. 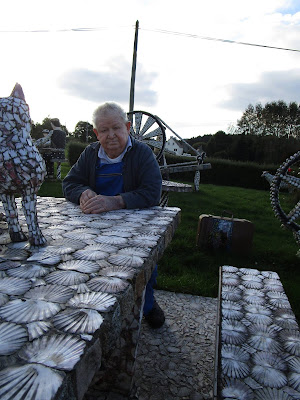 But then in October 2017 above photo was published on Facebook in the context of the project La Valise, a traveling gallery along France insolite, about which was reported on Facebook.

The picture shows Bothorel seated at a table with a table top of Saint Jacob's shells. The bench has the same decoration.

So it it turns out that in 2017 this art environment is still extant and it is likely that Bothorel by appointment still will welcome visitors who would like to take a look at his creations.