In a small community in the countryside of Brittany in France not far from St. Brieux,  Pierre and Yvette Darcel have created an art environment that in many ways is related to Breton life. 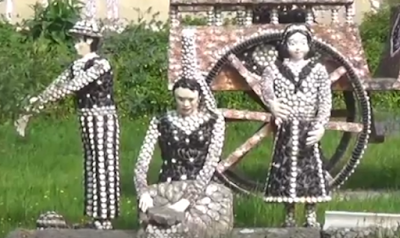 Pierre Darcel (1934-2021) was born in  Saint Carreuc, a small community in Brittany. For some time he was a plumber, but then he became a farmer, settling in Beaumenard, a small rural Breton community belonging to the municipality of Saint-Donan.

When retired, in 1994, together with his wife Yvette, Darcel began decorating the garden of their residence, as so often happens "just to do something"...

It would become a lifelong project. 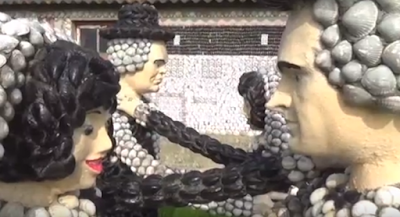 His first creations included some large Breton tools as used on the farm, but soon Darcel focused on making sculptures from concrete, which in general depict life size people and animals, often grouped into ensembles.

Most of these sculptures have been decorated with shells from mussels, painted by Yvette Darcel in the colors black and white. 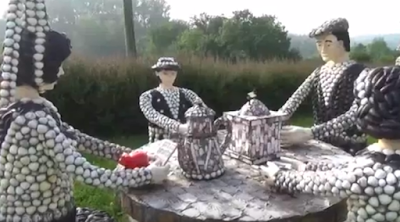 This way of decorating the sculptures gives them a very special appearance and is rather suitable to depict Breton local and folklorist scenes. as the Darcels like to do.

Gradually the site got an extensive collection of sculptures, which keep alive the memory of the Breton way of life. 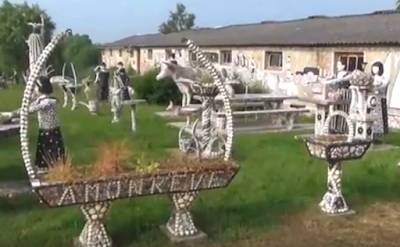 The garden is partly bordered by the long stone wall of the former pig stable.

This wall has been decorated with a variety of shell mosaics which also mainly depict scenes from traditional Breton life, like families around a table and craftsmen at work 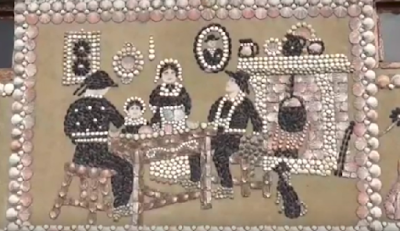 Pierre and Yvette Darcel would welcome visitors. As Arnelle Darcel in her weblog says:

(...) ce qui marque tous les visiteurs, au-delà des créations,  c’est l’ouverture, la chaleur,  la disponibilité et l’authenticité de Pierre et Yvette. Tous deux  savent s’arrêter pour présenter les lieux et les objets.  Plus qu’une visite c’est une rencontre qui a lieu .([...] what all visitors notice, beyond the creations, is the openness, the warmth, the availability and the authenticity of Pierre and Yvette. Both know how to pause to present the site and the objects. More than a visit, it is a meeting that takes place.)
Pierre Darcel passed away on September 3, 2021 at age 86. His wife and other members of the family continue to take care of the site.

Documentation
* On May 24, 2009 the french Animula Vagula weblog had the story, with pictures by Michèle Merlin. This blog also has a diashow of the creations (click "diaporama", right upper corner)
* Armelle Darcel Thomas, "Pierre et Yvette Darcel. Un rêve coquillé", in her weblog of May 30, 2009
* Article in regional newspaper Le Télégramme (August 2013)
* Pictures of a variety of sculptures on Sophie Lepetit's weblog (September 2014), here, here and here

* fragment (2018) about the site on the North France trip video by Serflac (YouTube, starts at 19.36, cannot be embedded here)

Email ThisBlogThis!Share to TwitterShare to FacebookShare to Pinterest
Labels: garden with sculptures from concrete and mosaic