Yekaterinburg, the capital of the Sverdlovsk region, is the fifth city of the Russian Federation. Situated on the east side of the Urals it would geographically be an Asian city, but the city considers itself as European.

Above pictured decorated house is located in the small community of Kunara, an 80 km north of Yekaterinburg,

Sergey Kirillov (1930-2001) in 1941 was still a young boy when his father had to leave the family to join the Russian army in the war against Germany. He would never return home again.

Young Sergey only had some three years of schooling. He became the blacksmith of the community

In 1951 he married Lydia Kharitonovna and the couple settled in the house of Sergey's grandfather,

It was an old property that needed some repair, so Kirillov began renovating it and doing this he also made decorations on some elements of the house he was repairing, a creative activity that apparently triggered him, because decorating the house became a lifetime project. 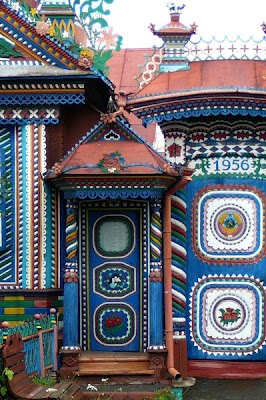 Kirillov did his job of blacksmith during daytime and in the evening he created the decorations, occasionally working until midnight. He would rise early, usually at four in the morning, to continue his creative activities.

Kirillov made small, brightly colored sculptures of young people (Pioneers), mainly made from wood, but partly also from metal (for example the skirt of a girl).

These creations were displayed on the roof of the house, as in the picture above and the one below. 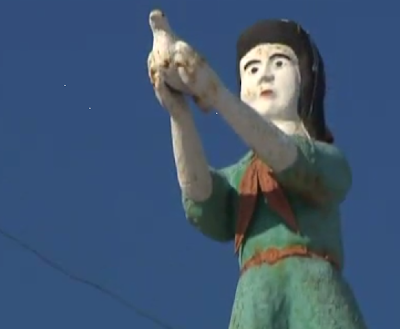 An inscription on the roof says "Work started in 1954 and was completed in 1967 on the eve of the 50th anniversary of the Great October Socialist Revolution!" 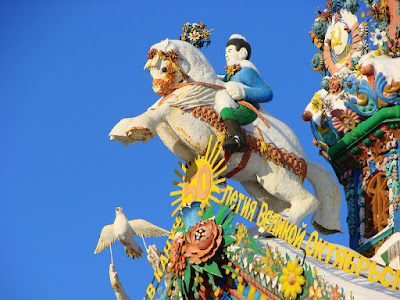 Except the exterior, Kirillov also has richly decorated the inside of the house

Kirillov was buried at the local cemetery

Kirillov died in 2001. He was buried  on the local cemetery in a grave decorated with a funeral monument he had created himself.

Currently the site is being cared for

After Kirillov's death his widow Lydia Kirillov Kharitonovna and her daughter continued to live in the house. They both took care of the upkeep of the decorated exterior in which they got help from volunteers, such as in summer 2012 when a group led by Yevgeny Roizman, leader of a social movement in Yekaterinburg and mayor of the city from 2013-2018, was active in repainting the decorations.
The house has been registered as a cultural heritage
In March 2020 regional newspaper E1.ru reported that the site has been added to the national register of cultural heritage. Both the family and Yevgeny Roizman are unhappy with this decision, mainly because now changes or repairs to the home are only allowed after official permission (and they likely are afraid of procedural problems or additional costs)
Documentation
* Website Artbird (September 2016) has an illustrated article (in Russian) about Kirillov's life and works
* Yevgeny Roizman and Julia Kruteeva, Домик в Кунаре. Цветы и голуби кузнеца Кириллова (Small house in Kunara. Flowers and doves blacksmith Kirillov), Yekaterinburg (Ed Tatlin), 2014 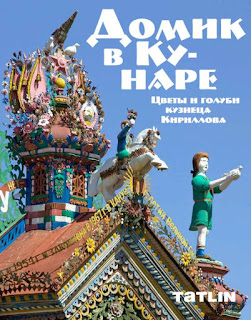 * Weblog Voices from Russia (August 2012)
* Weblog only-most.ru (in Russian)
* Article (2020, on Facebook, in Russian) by Andrey Bobrikhin, republished in English on OEE-texts
Videos
* A video dating from 1998 (2'51", Russia TV Channel 4) with Kirillov welcoming the TV crew (thanks to Andrey Bobrikhin who published this video on Facebook)