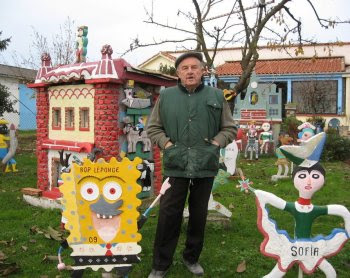 Sponge Bob is known in France too. Here he is, Bob l'éponge, in an art environment in the Toulouse area in the south of France.

Joseph Donadello was born in 1927. He is of Italian descent, so quite probably, like other Italians, he migrated to France to find work there.

Donadello had a job as a mason for many years, but due to an accident, he had to find other work. And then he had all kinds of professions, like postman. shoemaker and truck driver.

Retired in 1981, he began around 1985 decorating his garden with a variety of creations.

The garden has a lot of sculptures of persons and animals made from concrete and painted in bright colors. One can see Adam and Eve, Mickey Mouse, Romy Schneider. Laurel and Hardy, and so on, all together over 200 representations. The sculptures have a somewhat two-dimensional character.

But Donadello also has made kind of frescoes on walls and  small scale monumental structures, like this Panthéon.

This art environment is called the garden of Bépi Donal, the name that Donadello likes as his nickname.

As can be seen on next picture, Donadello also has made a lot of paintings, which fully cover the walls of his interior (together with the prizes won in jeu de boules competitions). 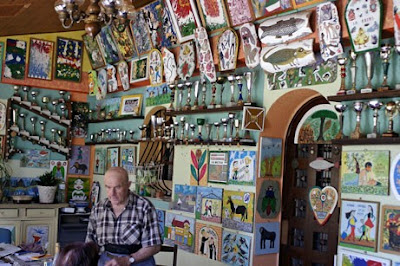