Located behind a stone wall that separates it from the street, the sculpture garden created by Honorine Burlin (1932-2010) has a charming collection of people and animals ¹.

In 1975 Honorine Burlin, daughter of a carpenter, settled with her husband Julien, a farmer, in Cintegabelle, south of Toulouse, France.

Before 1975 she already made wooden sculptures, but in Cintegabelle she couldn't find the right wooden material, so she tried making sculptures from concrete.

This pleased her and the next thirty years or so, until 2005, she continued making sculptures from painted concrete, ultimately creating an art environment with dozens of personalities and animals as present in daily life in the countryside.

Placed as in cohorts in the garden besides the house, some of the little people she created look as if marching along together on their way to some special event. 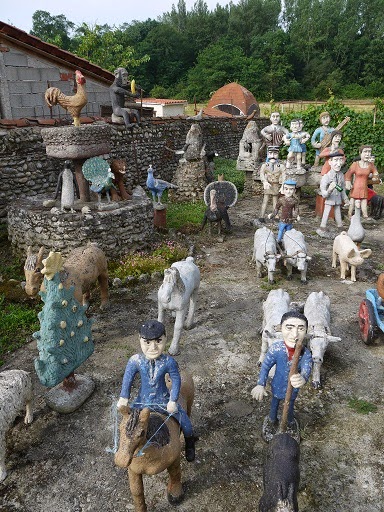 Others appear in a group, as if waiting for something special to happen. 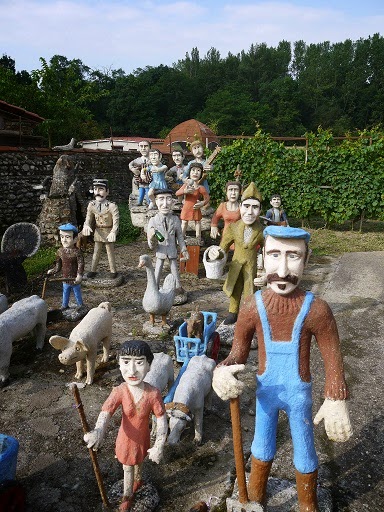 When in 2005 her hands no longer could endure the cement, Honorine Burlin ended her creative activity. She died in 2010. About half of her work already has been divided over family, friends and interested parties. 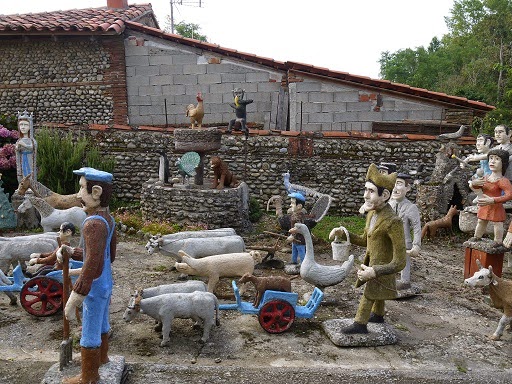 Cared for by Julien Burlin, the sculpture garden currently is still extant, but it is not open for public visits, so I refrain from giving the address.

note
¹ This revised version of the post which was first published in February 2011, includes information that became available thanks to Sophie Lepetit and Louis Bigou (see documentation).