France has as an extensive network of man made waterways. The most southern canal is the Canal du Midi, that runs from Sète to Toulouse where it meets the Garonne, in this way connecting the Mediterranean with the Atlantic.

The many locks in the canal are predominantly operated by lock keepers who live in a house that is located at the premises of the lock.

Joël  Barthes (born in 1955) since 1988 is the lock keeper (éclusier) of the écluse de l'Aiguille, near the small community of Puichéric.

In 1992 he began decorating the site. When making a walk, he stumbled upon a piece of wood and he got inspired to transform it into a decorative item which could be displayed near his house at the lock.

Making such decorative items became a lifetime project. Barthes first made all kind of wooden sculptures, later he switched to working with iron. 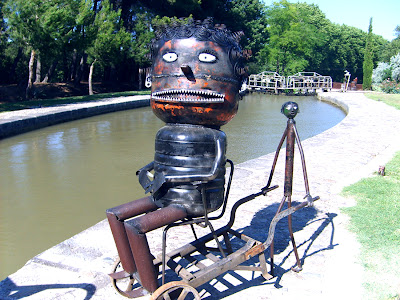 The over 200 objects he made from 1992 on, currently are scattered all over the place.

People sailing the canal, mostly on holiday trips, are surprised to see the exposition. If you look around on the internet, you will come along the logbooks where they have the stories of their holidays and their meetings with Joël Barthes.

The locals of Puichéric know they can bring their excess iron to Barthes, who recycles the material into  creative structures. 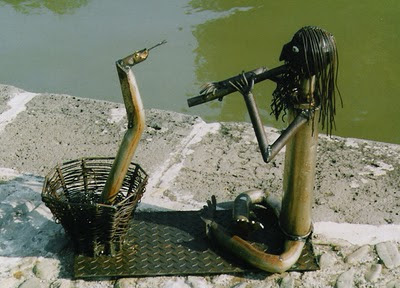 Barthes' work in general is rather humorous. For example it shows a dog walking his boss, or a fish catching the fisherman.

He also began making kinetic creations, such as a lady on a bike and various kinds of machinery. Such a movable item for example will automatically start once a ship sails past an electronic device.

Some of the sculptures are on sale. It's not necessary to arrive by barge at Puichéric to buy one.

Barthes' creations have been exposed in a number of expositions in the region. In 2010 he participated in the Biennale de l'Art Singulier in Aubagne.