North of the city of Vannes, in the department of Morbihan, France, the area Landes de Lanvaux comprises nice pastured and wooded countryside, with villages, chapels, castles, woods, megaliths older than the Egyptian pyramids…..and…..an until now rather undiscovered secret…. the domain of the peppered pond….

This domain is a creation of Alexis le Breton (1929-2009), who by profession was a farmer. He owned a plot land of some five hectares and when he became retired, around 1986, he began developing this plot, both from a horticultural and an artistic point of view.


Le Breton planted some 200 trees of all varieties, he digged a pond, constructed  a small chapel, a mill, a bar to meet friends, and he made sculptures to decorate the forested landscape of the domain.

Alexis le Breton had no training in sculpting what so ever. He just began. Every morning he was engaged in making creations from stone or wood, done in a naive style and based upon biblical stories, daily life, politics, actual happenings and universal themes like love.

Le Breton can be characterized by his witty verbal humor. He liked playing with words. So, as the locality where the domain is situated is named  Mare au sel (Salted pond), he liked to call the pond he had digged himself Mare au poivre (Peppered pond).

He coined the expression Ici on entend gazouiller les elephants  ("Here one can hear the elephants chirping"), an expression that has been used as subtitle for the Rémy Ricordeau movie (2011) about French outsider environments. In this way many of the sculptures have titles or captions with witty, critical or poetic remarks.

It must be a nice, rewarding excursion to walk along the almost 200 sculptures, which currently are carefully positioned along a trail of some two kilometers which meanders through the domain's wooded landscape. 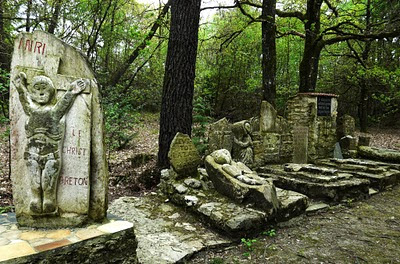 During his life, the creative activities of le Breton haven't got much public attention and the site remained virtually unnoticed. Before 2010 the internet had no references to it.

A group of friends has become active

In the spring of 2010 however the association Les Amis de la mare au poivre, presided by Marie-Thérèse Pasco, the daughter of Alexis le Breton, begun promoting the site.

Plans have been made to introduce the site to the general public and to make parking and picnic facilities.

Local newspapers and French writers about outsider art published articles about the domain.


Some documentation
* article (2019) by Jeanine Rivais, with an analytic review of the decorations in the garden
* weblog of Jean-Michel Chesné (text by Michel Leroux)
* post in the weblog of Bruno Montpied
* the site appears in  the movie Bricoleurs de Paradis
* series of pictures on Sophie Lepetit's weblog (June 2012); the text of this post has been translated into english and published in OEE-texts.
* another series of photos by Matthieu Morin on Facebook

Email ThisBlogThis!Share to TwitterShare to FacebookShare to Pinterest
Labels: garden with sculptures from stone, garden with wooden sculptures