Located northwest of Amsterdam, Netherlands, the municipality of Zaanstad for a part is rather urbanized and industrial, but for another part it is still quite rural. There you will find villages with old characteristic houses, surrounded by a green meadowy area.

Westzaan is such a community.

It has a virtually unknown hidden secret: a wonderful sculpture garden, created  by one of its inhabitants. 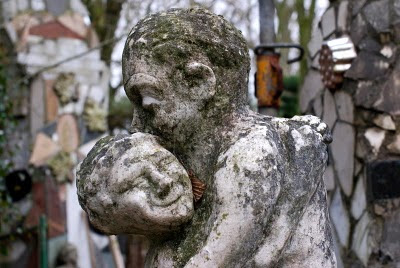 Klaas van den Brink (1930-2009) was a market trader selling fabrics. This profession earned him the nickname Lappenklaas ("lappen" is a Dutch equivalent for "fabrics").

He had a house along the road that from the village center runs south along a many kilometers long straight line which is typical for this landscape.

Behind the house there was a quite large piece of land, where van den Brink planted trees and shrubs, to transform it into a pleasant wooded area. 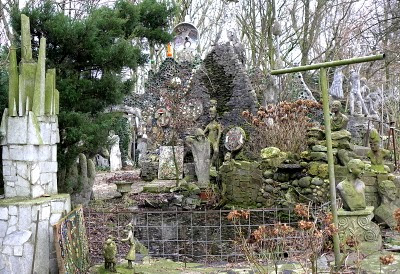 Klaas van den Brink was a creative man and although he had no training whatsoever as an artist, he had an artistic talent, as this self portrait shows:

In 1980 he began making sculptures, mosaic decorations and various creative structures which he displayed in the area behind the house. The sculptures were made by applying cement to an iron frame and modelling the concrete into all kind of impersonations.

Many of his sculptures have a rather airy appearance and some of them are shown as if fixed in a movement or are positioned in groups, remarkable features for a self-taught artist. 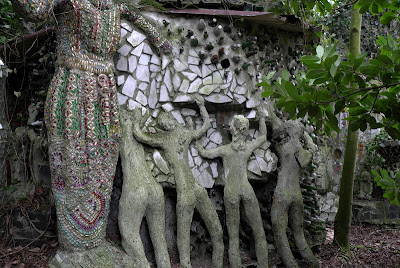 Van den Brink has been doing a lot of mosaic works, decorating some of his sculptures with small pieces of colored glass, as the pictures show.

The garden also has stand alone mosaic decorated  panels. Van den Brink would use all kinds of small colorful items and gadgets in the mosaics, which he as a market trader easily and cheaply could obtain in large quantities.

Large parts of the garden's surface have been covered mosaic-like with large plates. 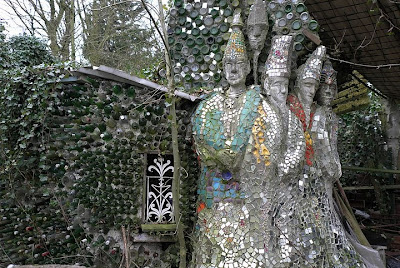 The picture above also shows an example of a wall Klaas van den Brink typically would like to construct by walling a multitude of empty (wine) bottles he received from restaurants, into cement. 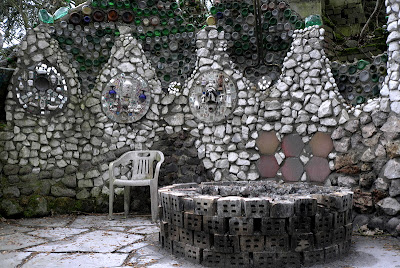 The garden is divided into several sections and one of these, pictured above, is kind of an "inner court" with a (fake) well.

The wall of this court, partly made from bottles walled into concrete, has been decorated with single round mosaics provided with small colorful items. 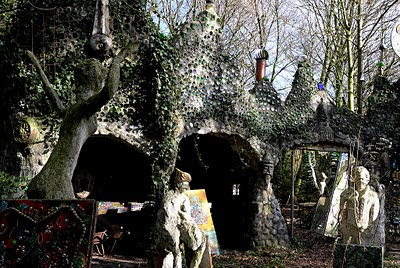 The garden has some shelters which serve to store sculptures and other decorative items, some in unfinished state. 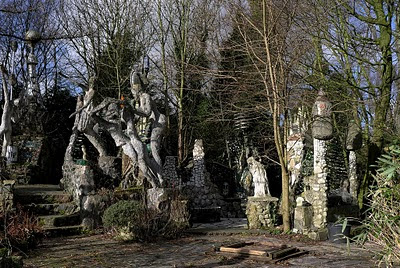 With its decorated walls and corridors providing room for the many sculptures, the wooded area behind the house has a very intimate character. It's like a cohesive community of sculpted impersonations who feel very much at home in their enclosed surroundings.

In 2000, due to an accident, van den Brink broke his hip, and he had to discontinue almost all of his artistic pursuits. He sadly died in December 2009 and thereafter the garden was being cared for by the family.

Email ThisBlogThis!Share to TwitterShare to FacebookShare to Pinterest
Labels: garden with sculptures from concrete and mosaic, mosaic garden