Opened in 1966, the Castle of Dreams in Heerlerheide in the south of the Netherlands, especially in the 1960s and 70s was a small scale amusement park where children and their parents could spend some pleasant hours. In terms of this blog this site can be seen as an art environment.

In 1954 Nico Schoonbroodt (1917-1983), who was a decorator, started a business in selling garden ornaments and garden sculptures, located in and around his house in the community of Heerlerheide.
It happened to be a rather large garden and Schoonbroodt thought that the items he was selling, should be surrounded by some nice, decorative creations. So he began embellishing the site with all kinds of creative constructions, using thousands kilo's of sand, concrete and iron, and a huge amount of natural stones.

Gradually the garden became an art environment, with an enormous elephant at the entrance, grotto's, ponds, corridors, balustrades, sculptures representing Buddha's and Maya's, all kinds of animals and a tower/castle of 21 meters high.
On May 27 1966 the garden was officially opened and advertised as an amusement park, which could be visited after paying a small entrance fee. The site was widely publicized in touristic magazines and local tourist guides.
And indeed, in the 1960s and 70s the site became a popular place, where families with young children liked to go for their amusement and to enjoy the fairytale atmosphere. 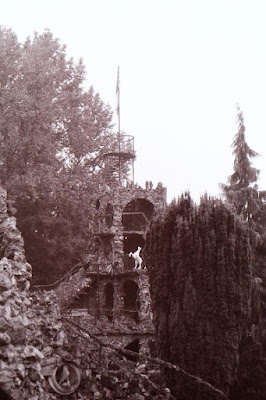 Nico Schoonbroodt lived through those years. After he had died in 1983, his son Jan Schoonbroodt continued to care for the site.
In 2006 Jan Schoonbroodt decided to sell house and garden. An advertisement was published to attract potential buyers.

Jan Schoonbroodt passed away December 18, 2011 without anyone had shown up who was interested in buying the property. His wife died October 2012.

Currently the site is closed and it's future is unclear. Early 2015 a new website announced an action to collect money for a re-start, but this action probably hasn't been successful and the website is not available anymore.

Documentation
* Article (April 2011) on weblog La société protectrice des enfants martyrs (in Dutch)
* Article (November 2012) on website Heerlen vertelt (Stories about Heerlen) (in Dutch)
Videos
* scenes of the site as it was in the late 2010s on the Netherlands trip video by Serflac (YouTube, starts at 14.15, cannot be embedded here)
* Video added in 2016 to YouTube (3'02") with an earlier broadcast of a Dutch TV program with Jan Schoonbroodt announcing the sale of house and site