Montrouge is a community in the Paris urban area, just across the southern part of périphérique ring road. One would not expect to find there a house decorated with mosaic à la Picassiette. But there it is, on a lively urban street.

He was born in Italy, a country he left in 1926 at age sixteen and already trained as a mason, to settle in France. His father had a job in Paris at the Marcel Conchon firm, a construction company, so Aldo joined him working for that firm, which had its offices and workshops on 127 rue la de République, Montrouge. 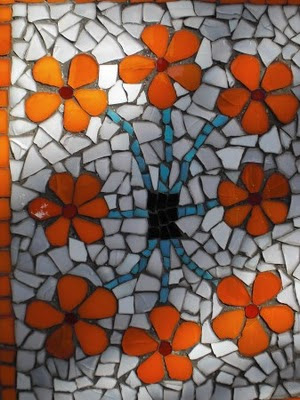 Gandini obviously was a good employee since he became a supervisor (chef de chantier). Also, when around 1936 he married Marie-Jeanne Couty, who had a job in the Conchon household, he could obtain a plot of the firms premises at the corner of the rue de la République and the rue Verdun.

On this plot he began constructing his house, 1 rue Verdun, first only the lower part, later some storeys too.

In 1950, because of an accident,  Gandini had to stop working. Around that time the Conchon construction firm left Paris to resettle in Morocco.

Now that he no longer had a job, Gandini began to decorate front- and backside of the house with mosaics. It is quite probable that he started the project just to have something to do.

The picture above shows the backside of the house. The lady in the background is Mrs Gandini.

Making these mosaic decorations of course is a creativity-inspired project.  But it has been reported that plastering these mosaics is somehow functional too, because this would prevent the rain seeping through the single brick walls. 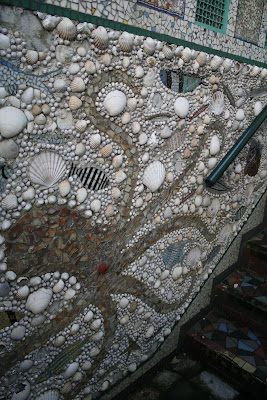 Not much has been written about this mosaic-decorated house, which still exists.  Picassiette's work has got much more publicity.

Documentation/more pictures.
* Editing the first version of this post in January 2011, I could trace just one written primary source on the internet: the webzine Montbouge, for and by inhabitants of the community of Montrouge. It has the story as related to Etienne Lang by mr and mrs Gandini's grandson in law Daniel Couty  (I like to acknowledge, that my note draws on this report).
Meanwhile other reports have been published, such as:
* Weblog Emaux et Moi authored by Murielle Chevalier with a series of pictures
*  Documentary website Habitants -Paysagistes of the Lille Art Museum (2018)