Born in the small community of Himmaste, in the Pölvamaa county in Estonia, Adelbert Juks (1926-2010) has become known as a folk artist who was so active in painting, that he not only worked on canvas, but also decorated most of the interior and exterior of his house.
.
Not much has been published about his life. He was a soldier in WWII, serving in the the Estonian corps on the side of the Russian army.  He got wounded, returned home with a disability and because of this had a war pension. 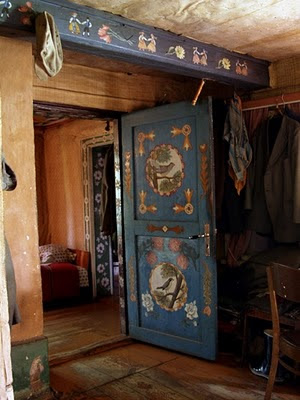 Juks has not been active in any civilian profession and neither did he have any education or training as a visual artist.

Except for the war period, Juks has during all his adult life been staying in and around his house, which he shared with two other members of his family.

Outdoors he was active in keeping bees and comparable small-scale farming and gardening activities.

He made oil paintings on canvas and other media, and decorations on walls, doors and ceilings, mostly in a naive folk art style.

However, as the next picture shows, when decorating the ceiling of the house, Juks also liked to make colorful  op-art like items. 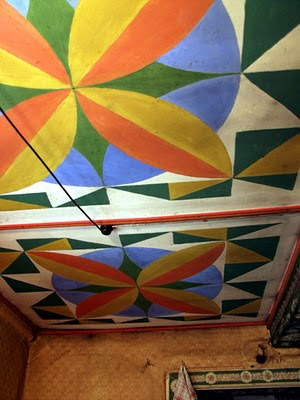 This kind of decoration he also applied to other parts of the house, as can be seen on next picture. 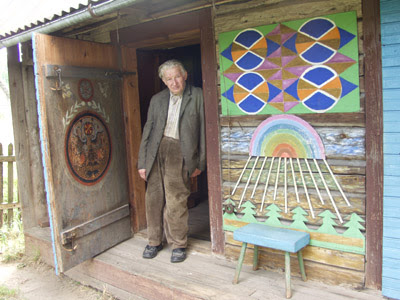 Up to now I couldn't trace any reports about what happened with the house where he lived and with his artistic legacy.

Juks' work has been shown in expositions which featured folk and outsider art, such as the exposition Solvates Medusa (Offending the Medusa), 2003, Tallinn Art Hall.

Documentation
* Article by Estonian art historian Sigrid Saarep on website Sirp
* Article by Piret Meos in the context of the screening of some films (February 2012) by Erkki Pirttola, including one about Juks