Manfred Gnädinger (1936-2002) was born in a well to do family in the the Böhringer district of the municipality of Radolfzell am Bodensee in southern Germany. He had six brothers and sisters. His mother died when he was 14 years old.

In the 1950s Manfred studied social work and he was employed at an educational institute. But he also liked travelling, like in 1959 he traveled through Italy from March to September. At that time he was in his early twenties and already had artistic ambitions, dreaming about setting up his own museum.

In the early 1960s Manfred made another trip, travelling in France and Spain, a voyage that in 1961 ended in Camelle, in the Coruña area in Spain, at that time a rather isolated community facing the Atlantic.

In Camelle he was given shelter in the house of a Spanish lady who was German from origin and still could speak the language. Apparently Gnädinger felt at home in Camelle. It has been said that he and his landlady were like mother and son.  He also started to develop artistic activities and in some rooms of the house where he stayed, he organized exhibitions of his work

However, when his landlady died, Gnädinger had to leave the house. A neighbor sold him for a small price a piece of land located near the ocean and helped him build a cabin on this spot..

In that cabin with an area of about 13 m², without running water and electricity, Gnädinger began to live in his own way, feeding himself with food he procured from the sea and with vegetables he cultivated in his own garden, walking barefoot and dressed in just a loincloth, exercising a lot by swimming far into the ocean and jogging daily.


Creating a museum and an art environment

In and around his cabin he created his own artistic environment. He made sculptures from stones and rocks that were around and from all kind of washed up material that could be found on the beach.

The cabin became a museum, adorned with his paintings and drawings and also his notebooks and artbooks, all neatly arranged. It could be visited by tourists, who had to pay a small fee to look around and had to make some drawing in one of Gnädinger’s notebooks.


He became known as the Aleman of Camelle (the German of Camelle) and generally was spoken of as Man. Although he was rather eccentric, apart from a single incident the villagers in general seem to have accepted his way of life and looked at him as one who belonged to the community.

That incident had to do with the planned construction of a 380 meter long dam to the sea, meant to improve the safety of the ships of the local fishermen. The dam would intersect the space next to the cabin and initially Gnädinger opposed this plan, which caused a -quickly resolved-  conflict with the fishermen. When in 1985 the dam was built, it became an  extension of the art environment, lively decorated by Gnädinger with his specific circular paintings. 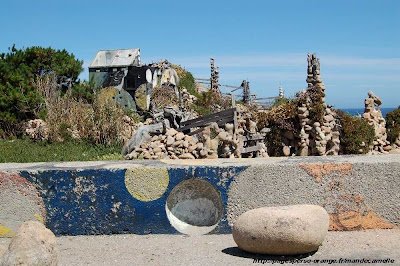 Pollution of the coast

In 2002 there were dramatic developments

Sailing along the Galician coast, the oil tanker Prestige run into problems, it broke into two and lost tons of oil. The sea and the beaches were heavily polluted and Man’s plot, creations and cabin were ruined, covered with a thick layer of black raw oil.

Emotionally shocked, Man locked himself up in his cabin with a sign on the door that everybody should keep out. After a number of days people became worried, entered the cabin and found Man dead. 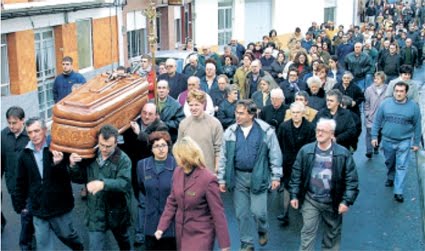 His death aroused much publicity in the Spanish newspapers. He was described as the first human victim of oil pollution.

Gnädinger was buried at the local cemetery. Ten years later his mortal remains were cremated. The urn with his ashes for years stayed at the cemetery, but on January 27, 2018 this urn, in accordance with Gnädinger's last will, was relocated to a place near his site. Family members attended the ceremony.

After Man had passed away the government has not been very active in taking measures to preserve the site for the future, although it has been reported that Gnädinger had legated money to the state to keep the site intact.

At the time the first version of this post was published (2009) the cabin and the sculptures were still extant. A fence had been erected with a signpost asking people to respect the site. A foundation had been formed by friends of the museum to promote measures to protect the site.

In July 2009 the Galician parliament decided to start a project to study all aspects of such a preservation and an interview with Juan Creus who would do the research was published.

Meanwhile the house gradually fell into decay as can be seen on below picture (December 2010) from the website Man de Camelle:

One year later, at the end of 2011, it was announced that on December 27 and 28 there would be a demonstration in Camelle to protest against the inactivity of authorities to take measures to protect the site.

For many years no action was taken by the authorities. The site was deteriorating.

In June 2015 however in a building on the Rua Muelle 9 in Camelle a permanent exposition of Man's legacy was opened, which included Man's notebooks and other personal items. photographs and other documentary material, thus giving visitors an idea of Man's life and works.

In 2017 the site was restored
In March 2017 the local authorities approved the restoration of Man's house, a project prepared by the architects Juan Creus and Covadonga Carrasco. A first action included a selective cleaning of the interior of the house, as well as the rocky terrain around the house. Also a drainage from the outside would be made to allow the rapid evacuation of rainwater.

It was also announced that the paintings made by Man would be restored so that they can be preserved for later periods.

The restoration of the cabin took place in December 2017.
Situation late 2021 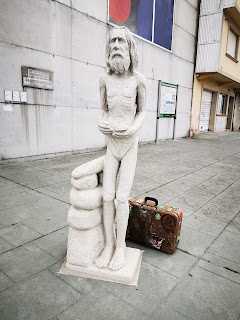 The pictures  above and the one below were made in October 2021 by Tiramisu Bootfighter, who traveled through Spain in the context of his project La Valise, Galerie Ambulante. The one left above shows what's left of Manfred's cabin and the one below shows a sculpture made of stacked stones that has stood the test of time
The picture above right shows a sculpture that is located in the local museum dedicated to Gnädinger, depicting him in front of the valise that accompanies Bootfighter on his travels. 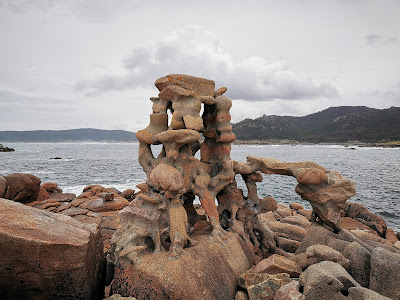 Documentation
* Man, home sen paz (man without peace), a movie (2010, 78") by Simón Vázquez and David Formoso. This film had its premiere on december 28, 2010, in Camelle, 8 years after the 2002 disaster
* The site got a scholarly review in: Jo Farb Hernandez, Singular Spaces. From the Eccentric to the Extraordinary in Spanish Art Environments, Seattle (Raw Vision, SPACES, San José State University), 2013. A short version of this review on SPACES website (added November 2013)
* Article by Yaysis Ojeda Becerra, “Los círculos di Man" (The circles of Man) on website Prontuario de Arte. This article discusses Gnädinger's world of thinking when making his artworks, including the deeper meaning of the circles in his decorative work.
* Article by Andrea Serodio Domínguez, "Man de Camelle (Camariñas, A Coruña). Presentando el museo del artista", in internet magazine Bric-á-Brac, nr 2 (2019), p. 95-110. This article in particular discusses Gnadinger's life from the perspective of his desire to create and manage a museum.

Email ThisBlogThis!Share to TwitterShare to FacebookShare to Pinterest
Labels: display of sculptures made from stone, garden with sculptures from stone