Above picture shows what in former days was a farm, located in the de Hoven neighborhood of Zutphen, a historical city along the river IJssel in the Netherlands.

The old town is on the right bank of the river. The de Hoven community, with the farm and (formerly) the grass lands, is on the left bank.

Born in de Hoven, Herman Kip (1925-2006) all his life has lived on the farm, a typical building since it lacks a rural appearance and looks more like an urban residential home. In Dutch this is called a stadsboerderij, something like an urban farm.

As a young man, Herman Kip had artistic ambitions, but his parents would have none of this. He was needed on the cattle farm, so that's where he stayed. He never got married and if there was a love affair in his youth, it failed. 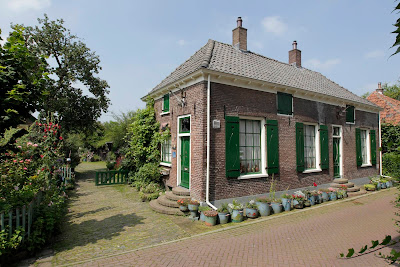 After his parents had died, Herman Kip from 1974 lived quite alone on the farm.

He would not know of modernizing the property and never installed an interior toilet or waterworks. Herman would sleep in what in Dutch is called a bedstee, a bedstead, kind of an inbuilt wardrobe with a bed.

Until today, the interior has remained as it was in 1860 when the farmhouse was built.
Herman Kip, painter

Around 1975, when he was in his early fifties, Herman Kip began expressing the passion he had since childhood. He began making paintings, working on canvas and cardboard. He also decorated the interior of the house and all objects around, such as wooden shoes, milk cans, cupboards, chairs, whatever.

Such a burst of creative energy one sees more often in people, who in their early years could not follow their passion. This blog has many examples, such as Enni Id (Finland) and Bonaria Manca (Italy) 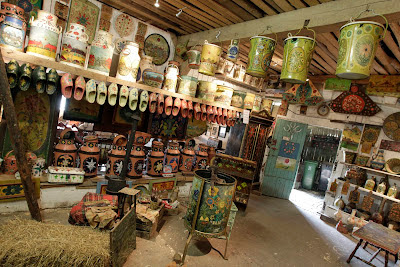 Kip's paintings on canvas are done in a naive style. A lover of nature, he has depicted all kinds of animals and landscapes, evoking memories of his childhood.

Since Kip had no training at all in the use of material, he did not know much about technique, so the paint of his works can get lost. If necessary, volunteers who take care of the site after Kip passed away in 2006, will help to restore the artworks. 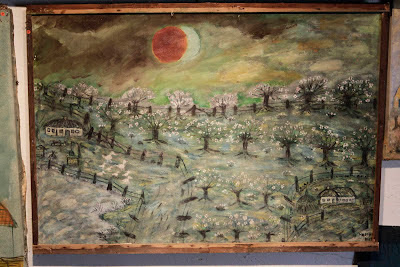 In the 1980s the neighborhood around the farm gradually became urbanized. The farm could not comply to the new EU rules and Herman Kip had to finish keeping cattle.

In the 1990s Kip got his old age pension and lived a retired life. He never would talk about his activities as a painter and he would not show his work to the public. Although some neighbors knew about his creative activities, Herman would never talk with them about his motives and no one has ever seen him painting. 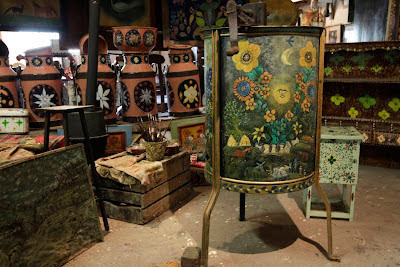 Currently the site is managed as a museum

In 2006 Kip became ill, had to be hospitalized and passed away.

He had arranged that after his death the farmhouse would be legated to the city of Zutphen.

The property, currently owned by the city, has become a small local museum, run by a foundation, with help of many volunteers. It can be visited on weekends in summer. The interior of the farmhouse has been left as it was when Herman Kip lived there.

The local authorities have allocated a budget to establish a small visitors center situated apart from the house. Visitors can watch an introductory video about Herman Kip and can buy two booklets with photographs of his works, i.e. his landscapes and his paintings of flowers.