Sneglehuset is the name of a shell decorated house located in Thyborøn in the community of Bjornehaven, Denmark.

Bjornehaven is one of the main fishery ports of Denmark, so it is no surprise that this shell house was created by a fisherman.

Pedersen was a fisherman.

In the late 1940s the couple had to leave Rønland and they moved to Thyborøn, a moving Mrs Pedersen didn't like very much. The story says that Alfred Pedersen promised her that he would make their new house in Thyborøn so beautiful, that people from all around would come to take a look.

So in 1949 he began decorating the house with shells, a project he would continue for some 25 years, until in 1974, when he was in his early eighties, he considered the project as finished. 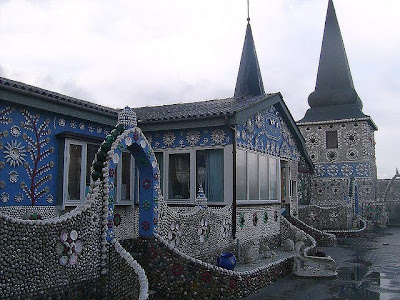 Once he had decorated the exterior walls of his house, he decided to build another one adjacent to the original one so as to have more walls to decorate.

In this way the 14 m high tower, that is part of the complex, was established. 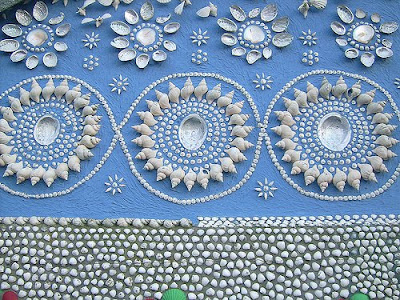 The shell decorations on the exterior wall in general are applied to a blue or gray surface. The interior has been abundantly decorated too, although the basic color there is not blue or gray, but a kind of yellow-brown. 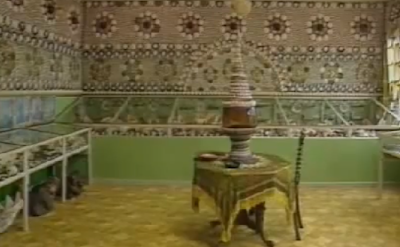 Inside there are also folk art items on display, such as little ships in a bottle made by Danish fishermen during the long, dark winter months.

The house became a museum

In 1975 the decorated house, named Sneglehuset, was opened as a museum, managed by the next generation of the family.

Many websites refer to the site from a touristic point of view, most of them repeating the same, generally known facts.

In 2019 the family transferred the management of the site to a couple outside the family, namely Ken Koustrup and Hanne Mette Kirkedal.