The picture above shows a house built in 1905, located in the small community of Burdaard in the province of Friesland in the Netherlands. It's a museum since 1983.

Ruurd Wiersma (1904-1980), born in a nearby community, settled in this house in the 1950s. He was a transporter of milk from the cattle farms to the factory, which he did by boat.

One day in 1965, when he already was in his sixties, the oil stove in the sitting room exploded and all walls got covered with a thick layer of root. To repair this, Wiersma covered the walls with paper.

But he did not like the resulting whiteness of the walls and decided to decorate them.

Four walls, four seasons..... so he made paintings of summer, autumn, winter and spring, evocating memories of his youth and scenes from the region where he lived.

The wall decorated with a spring scene has a green meadow with grazing cattle at the bottom side, a blue sky with remigrating birds on the upper side and in between a lake (which are numerous in Frisia), all together a scene with the typical elements of the Frisian countryside.

The summer scene is characterized by a picture with a majestic sun, a wavy sea, a lively beach and a peaceful countryside.

The next picture shows the decoration as it is situated in the interior on the left side of the stove. 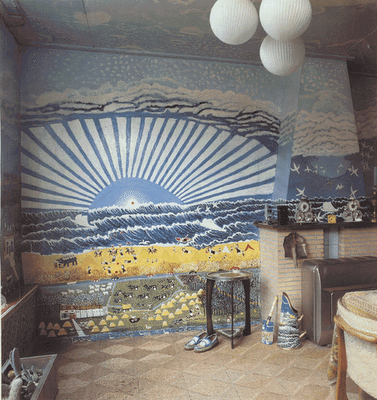 Ruurd Wiersma not only decorated the walls of the house, but also other elements, like furniture, shoes, etc. In this way he transformed his house into an art environment. 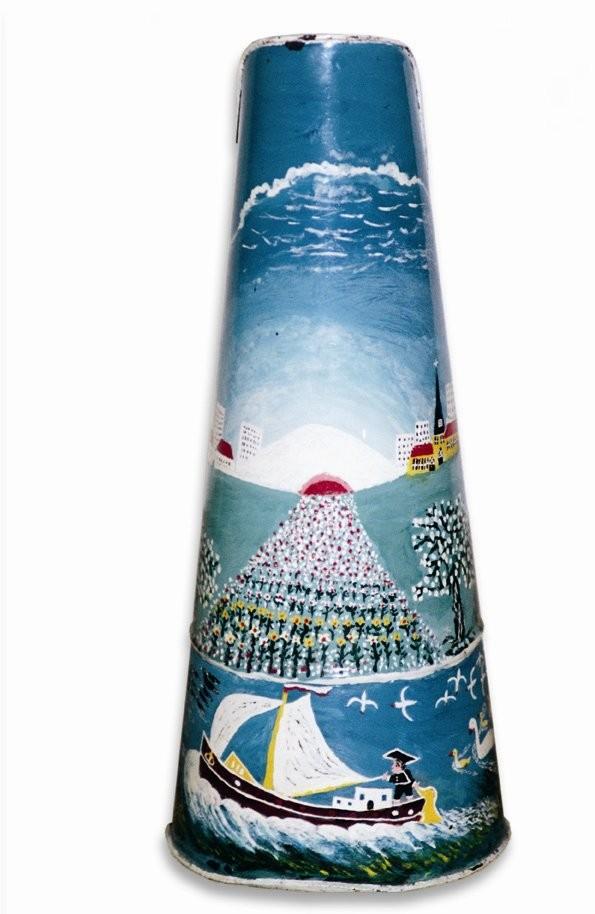 Wiersma probably wasn't aware of classifications like outsider art, nor is it likely that he did know about creators of art environments elsewhere in the world. He just liked to make his paintings.

After he had finished the Four Seasons, Wiersma people around him stimulated him to continue his artistic activities.

He began making paintings, working with enamel for bikes on hardboard and triplex. In the last ten years of his life he has made some 300 paintings. 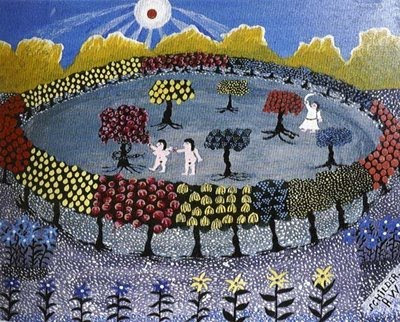 He liked to do biblical scenes, such as above Garden of Eden.and he made a lot of paintings that evocated scenes of daily life in Friesland.

In the Netherlands, where in the 1980s outsider art was not a common concept, Wiersma was classified as a naive painter.

Ruurd Wiersma's house is preserved as a museum

A number of Wiersma's paintings are in private collections (he could just give them away). But some forty of his paintings still can be seen in the house where he lived, which -as said- has been transformed into a museum.

Ruurd Wiersma had legated his house and some money to the hospital where he was treated before he died.

Friends and locals campaigned to preserve the house and a foundation was formed (1981) to take care of it, its decorated interior and Wiersma's paintings. This foundation could buy the house from the hospital for a symbolic amount (1982).

A problem the museum's board  faces nowadays is how to preserve technically the Four Seasons. In this old house, with its thin walls, the wall decorations are very sensitive to moisture. Fortunately, funds have become available to tackle this problem.

* Alle dagen zondag (All days Sunday), documentary film (1978, 30') made by Marijke Jongbloed (Dutch Film Academy/IKON TV) and shown on Dutch TV in 1978, with Wiersma talking about his artwork (published on YouTube december 2012 by the Frisian broadcasting company Omrop Fryslân (documentary starts at 0.45")