Art environments as presented in this weblog in general are related to the place of living of the maker, i.e. a house or a garden around the house. The art environment presented in the following post, created by an inhabitant of the city of Betanzos in the Galician area in the north of Spain, however manifests itself as a variety of artworks in kind of a park.

Returned to Betanzos in 1893 he decided to use his fortune for the cultural and social improvement of the city and its inhabitants, doing so in cooperation with his brother, Jésus. One way was to allocate money for the establishment of social institutions like a sanatorium, a shelter for mentally handicapped girls and schools.

The other way was the creation of a public leisure park with an educational background: El Pasatiempo.

An encyclopedic site
The park has a surface of about 90.000 m². It would take Naveira some twenty years to accomplish the site. He himself was the auctor intellectualis of the project, but he employed some 200 workmen to help with the layout of the park and the construction of the scenes and sculptors were commissioned to make sculptures and murals.


Walking around in the park is like making a walk along highlights of history, as would be present in the collective consciousness of people living in the western world in the beginning of the 20th century (without radio, cinema, television or internet). The park indeed is a Parque Enciclopédico.


So of course there is classical Egypt, with its pyramids..... 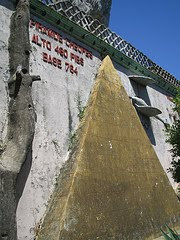 
And there were many more scenes, like the Chinese Wall, a mosque in Cairo, sculptures of exotic animals, a botanic garden presenting crops from all continents, and also a rather well known item: the wall with clocks, showing the time in cities in the various time zones of the world. 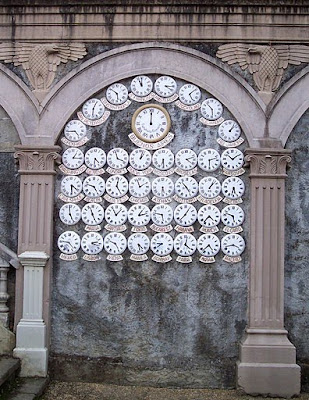 Apart from the educative elements, the site also has sections that are meant for the amusement of the visitors: grotto's, ponds, a labyrinth, an open air theatre...

In the 1920s El Pasatiempo was a must see for travelers.

After Naveira died and especially during the Spanish civil war and World War II the site became neglected and items were vandalized or stolen. For example, there was a gallery with statues of all popes of the Roman Catholic church, but this gallery has gone and nowadays it is a football field.

The site currently is cared for by the city

The whole complex was declared to be a Bien de interés cultural in 1981. Currently it is owned and cared for by the city of Betanzos (since 1986). The city has done much to restore the park's former glory.

Documentation
* OEE-texts has a compilation of texts (March 2010) in English on the origins, features, decay and present state of El Pasatiempo, derived from the Spanish weblog of Amio Cajander

* The site got a scholarly review in: Jo Farb Hernandez, Singular Spaces. From the Eccentric to the Extraordinary in Spanish Art Environments, Seattle (Raw Vision, SPACES, San José State University), 2013.  An abridged version of this article was published on the website of SPACES.
* Google maps has a page with the location of the main features of the park.
Video
* Video by Videos Bos (2018, YouTube, 9'10")