The picture shows the Berendina Fennegina, a typical Dutch name for this ship, a tjalk. In former times in the Netherlands such a ship was used for bulk transport on the inner sea and the canals. The ship is in the Amstel rive, moored in the heart of the city of Amsterdam, close to the Town Hall, the Waterlooplein flea market and the Amsterdam Hermitage Museum.

From the mid 1960s until the mid 1980s Walter Karl Glück (1929-1986) lived on this ship.  He was a self-taught artist, who in his own way gave colour to the city. As the Mayor and Aldermen wrote in 1986 after he died: "In Amsterdam "it" happens: the playful, the surprising. Walter Glück was pre-eminently the man to colour this in his own, special way"

Born in 1929 in New York City, Walter Karl Glück as a young man followed some courses, with the idea to become a freelance photographer and journalist. He had all kinds of jobs, working in an ice-cream factory and as a lifeguard (he was a good swimmer).

In 1961 he made a European trip, travelling in an old van through France, Switzerland, Spain, Portugal, England, Belgium, Danemark, Sweden and Russia, until he arrived in Amsterdam, Netherlands, were he decided to settle. He rather quickly (in 1961) got a permit to stay in the Netherlands, what nowadays wouldn't be done so easy. 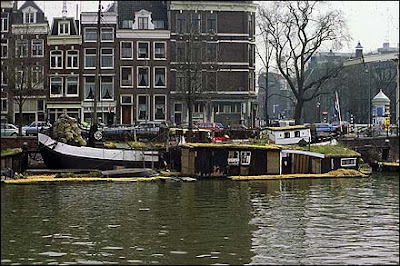 After 1961 Glück continued travelling and doing photography. He also did some painting, until in 1964 the murdering of Kennedy was a turning point in his life. It made him decide to become a full-time artist. He bought an old ship moored in the Amstel river in which he installed a studio. With a lot of energy he focused upon painting colorful scenes on driftwood and old hatches he collected in the harbor.

He named these creations Ikons and he called himself Viktor IV, both namings without any religious connotation.

His work attracted attention of professionals in the Amsterdam art world. In January 1966 Viktor IV had an exposition in the Lefebre Gallery in New York. His work was introduced by Willem Sandberg, until 1962 director of the Amsterdam Stedelijk (Municipal) Museum.

The expo was so profitable that Glück could buy another, better ship, the Berendina Fennegina.

In the early 1970s Amsterdam became kind of a hippy paradise. Young people from all over the world flocked the city and would spend the night on Dam Square and in the public Vondelpark. Open air sleeping was soon regulated by providing sleep ins, but the scene in the city in general remained free, tolerant and creative.

Viktor IV in his own way made a contribution to this scene by surrounding his houseboat with all kinds of flottable constructions which included climbable towers and masts. People in tourist boats would applaud when he dived from these vertical constructions and swam around in the river.


The harbour authorities took a mild eye on these constructions and were able to convince Glück that expanding horizontally rather than vertically was to be preferred, probably with the provision that he would not try to reach the opposite border of the river.

Viktor IV's art environment in terms of floating structures has been extant in the 1970s and 80s. The decorated interior of the houseboat has stood the test of time and is currently (2020) still largely present.


In his development as an artist from 1970 on, Glück paid less attention to making Ikons, but began making logbook notes, i.e. texts, notes, drawings on sheets of paper, commenting on what happened in his life and in the world, all together some 5000 sheets. In 1977 they were exposed in the Amsterdam Stedelijk (Municipal) Museum

Then, in 1972, together with his partner Ina, he had met in 1968 in Denmark, he founded the Second Quality Construction Company. That marked the beginning of the construction of the rafts around the ship, made from all kinds of thrown away materials. In this period Glück called himself Jack Sun (but most people would refer to him as Viktor IV).

Another artistic period began around 1975 when Glück got the fantasy to be of Bulgarian descent and began to call himself Bulgar.

He became very interested in clocks and created all kinds of clockworks, freely interpreting the position of the figures on the dial or letting the hands turn backwards. Bulgar Time (1980)......

In June 1986, while repairing the underwater connections of the floating structures, Glück got entangled in the ropes and sadly drowned. He was buried in the Zorgvlied graveyard, along the Amstel river, some kilometers up stream. His body was transported by ship, in a procession of numerous other ships.

Following Carl Glück's death, the floating structures gradually disappeared. One part has been moved to another Amsterdam channel, the Geldersekade, in the heart of the old town.

Above and below pictures were made in april 2002. The construction had become kind of a floating greening, gratefully used by waterfowl and adding some greenery to the otherwise urban town center. 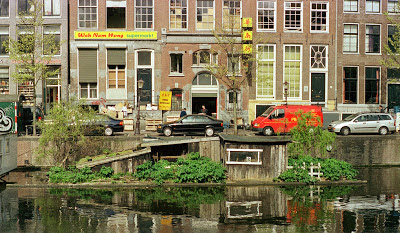 In 2004 however, the authorities decided to clean up what they considered as a mess, a premature decision, since currently it is official policy to add floating gardens for waterfowl to canals.

The Berendina Fennegina currently still lies at the same place. During a number of years it was exploited by the Danish Association of Architects as a hostel for their members, but meanwhile the ship was bought by a Dutchman, with the idea to transform it into a museum.


Some documentation
* Since 2006 a Dutch foundation aims to promote and make an inventory of Glück's artistic work. Their website  has many pictures (texts in Dutch and English).
* Website by Ad Petersen with the story of Viktor IV, een Amerikaan in Amsterdam (an American in Amsterdam)
* Examples of Viktor IV's work can be seen on the website of Galleri 5000.
* Amsterdam local TV in February 2020 had a video (24', Dutch spoken) about the current decoration of the ship

Video
* Video on YouTube of a film (55'17") made in 1981 by August Louisson-Barrier, an impression of Viktor IV's daily activities in his Bulgar period