This larger than life sculpture is one of the three enormous creations which in the late 1940s were prominent in a garden in the community of Weybridge, England, United Kingdom.

Named Life, Devotion and Sanctuary, these sculptures have been made by the owner of the garden, self-taught artist Jack Bilbo (1907-1967), who lived in Weybridge from 1945 until 1949.
One of the creations had a hidden door, through which Bilbo could slip in and secretly overhear comments of eventual visitors.

Jack Bilbo sold the house in 1949 to leave for France. The new owners did not hesitate to remove the sculptures they evidently did not like (as reported, dynamite had to be used to bring the statues down...).

The story of Bilbo's life is truly fascinating. He was born in Germany as Hugo Cyrill Kulp Baruch, the son of a well-to-do Berlin family, that run a company in theater costumes.

Young Hugo went to the United States, where he was employed as a body guard by Al Capone, or so he said. He probably made this all up himself, just as the book he wrote about this job.

Anyhow, around 1930 he was back in Berlin. He was co-founder of a group that opposed Hitler's policies, the Kampfbunde gegen den Faschismus. Because of this, and by being Jewish, in 1933 he had to flee Germany, going via France to Spain. In Barcelona he run a pub, the SOS bar, that was frequented by many artists. Because of his active involvement in the Republican case, in 1936 he had to flee again. He went to London.

There he wanted to start a career as a visual artist, making paintings and sculptures. I understand that suddenly in 1939 he decided to start painting. He had to pawn some of his belongings to raise the money to buy some canvasses, brushes and paint. I could not find any reports about an academic artistic training. His visual artwork was definitely outside the mainstream.

When England became involved in World War II,  Bilbo as a German by birth was interned for some months, like other artists and intellectuals who had fled Germany. Bilbo will have met them and probably has participated in activities organized in the camp, like expositions and meetings.

Jack Bilbo's main occupation during the war was running an art gallery in London, the Modern Art Gallery, located in Charles II Street. He himself made paintings too, in a modernist style. 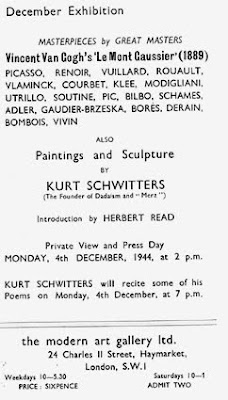 As this poster shows, Bilbo's Modern Art Gallery did not represent small fry (By the way: the works Schwitters exhibited at the gallery in December 1944 have been exhibited once more in an exposition in Tate Britain Schwitters in Britain  January-May 2013).

During the war some German artists and intellectuals who had fled Germany, lived in England, such as Kurt Schwitters. Bilbo's gallery probably was a meeting place for a number of them, because he also organized evenings with lectures and discussions about modern art.

In 1946 the gallery moved to Weybridge, a small community on the Thames River, not far from the city of London. The idea was to transform the house into a museum of modern art. The enormous sculptures he made probably had to be the start of an open air exhibition of modern sculpture.

After the war Bilbo applied a number of times to be naturalized as a British national, but his requests were declined.

So, in 1949 he left England. He bought a ship (the Dutch boeier "Brave Hendrik"), crossed the Channel and sailed along the French canals to the south of France. There he stayed in Sanary-sur-Mer and Cannes, earning his living by (once more) running a café.

In 1957 Bilbo returned to Berlin, once more running a pub, this one named Kapt'n Bilbo's Hafenspelunke.

As has been noted in a comment on this post (Klaus Ferentschik, June 2013), Friedrich Schröder-Sonnenstern in the spring of 1961 had his very first exposition in Germany in this pub. It would be quite interesting to learn more about what happened in the Hafenspelunke in terms of artistic manifestations.

In 1967, the last year of Bilbo's life, the district mayor declared him an honorary citizen of Berlin-Schöneberg. Jack Bilbo died in Berlin in December 1967.

He was a very special person, who can be characterized by the title he gave to the autobiography he published in 1948, a title that runs: An Autobiography. The First Forty Years of the Complete and Intimate Life Story of an Artist, Author, Sculptor, Art Dealer, Philosopher, Psychologist, Traveller, and a Modernist Fighter for Humanity (London, 1948)

Documentation
* article in Wikipedia
* website England and Co with specimen of Jack Bilbo's drawings
* Ludwig Lugmeier, Gangster und Ehrenbürger, an extensive biography (April 2017), published on the website taz (in German)
* an interview in 1947 with Bilbo in Weybridge amidst his sculptures on a video by British Pathé on YouTube,
first published February 2010, last revised June 2020
Jack Bilbo
Sculpture Garden
Weybridge, district Surrey, region South West of England, United Kingdom
the site has existed only for some years after WWII, until around 1949
Posted by henk van es at 8:00 PM