Above photo of Bonaria Manca is a still from the Marie Famulicki movie La sérénité sans carburant (Serenity with no fuel), produced in 2004 when Manca was at age 79 and had become known in the fields of outsider art and art environments

Bonaria Manca was born on July 10th, 1925 in the small community of Orune on the isle of Sardinia, In 1947 her family moved to the Viterbo area on Italy's mainland, north of Rome.

In 1965 Bonaria Manca settled in the community of Tuscania in a house bought by the family. Her marriage, contracted in 1968, held only some 12 years, especially because her husband could not accept Bonaria's independent way of life.

After her mother (in 1975) and a beloved brother (in 1978) had died, and her husband had left her (1980), she fell into a crisis, which she overcame in 1981 by starting to make paintings.
Although Bonaria Manca always had been fond of creative work, such as doing embroidery, painting became her passion, such a passion indeed, that from 1997 on she also began decorating walls and ceilings of her house with frescoes. Her themes included rural, religious and biblical scenes, memories from her life, totemic figures, all done in her specific personal style and use of colors.


She also has been working on canvas and card board, in her work evocating memories of her youth, scenes of rivers, mountains, woods, nature....

Bonaria Manca was rather reluctant to sell her work, since she felt these works had a soul, had to stay where they originated and should not be separated from her. 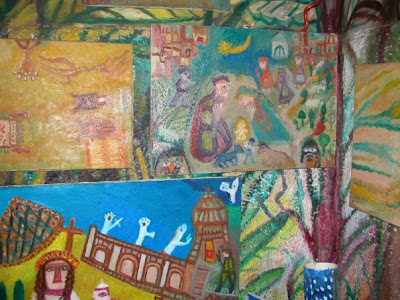 However, the Dutch outsider art collection De Stadshof could buy one of her paintings which was displayed for the first in the group exhibition Masters of the Margin (De Stadshof, Zwolle, Netherlands, November 1999 - March 2000). Later more paintings were added to the Stadshof collection.

In 2004 Marie Famulicki presented her movie Serenity without fuel, featuring the artist and her creations.

In subsequent years Manca's paintings on canvas have been exposed in various venues in Europe (Rome, Sardinia, Gent, Paris....). 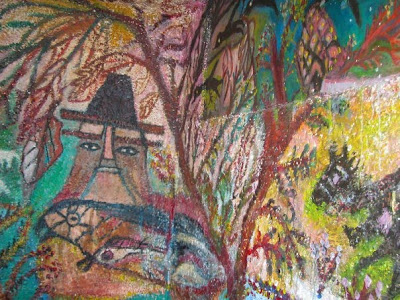 Partly because of these expositions, Manca's creative work has become increasingly known, also internationally.
In her late eighties, in 2013, Bonaria Manca ended making paintings. She passed away in the early hours of October 17th, 2020.

A conference and a booklet about the artist
In September 2014 a conference was held in Tuscania on the occasion of the publication of the booklet Bonaria Manca. Rinascere ogni giorno, edited by Pavel Konečný and Roberta Trapani (see documentation).

Saving the site for the future

In the meantime (in October 2013) an association of friends was formed, which aimed to sustain the artist now she was in her nineties and which also aimed to save Manca's house for the future. In September 2015 this Associazione Bonaria Manca organized a conference in Tuscania.

In December 2015 it was announced that the Italian Department of Culture had decided that Bonaria Manca's house and her artworks inside would have a protected status indeed. In the future it might be used as a studio for artists in residence 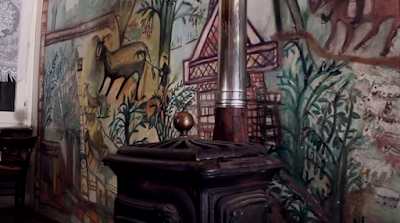 * Curated by Roberta Trapani, in 2010 Bonaria Manca's paintings were exposed at the 11th Festival International d'Art Singulier, July 31-August 29, Aubagne, France. This was the first time her work was presented in France. The artist actively took part in some of the meetings that were organised in the context of this festival.
* Above exposition was repeated in Paris (galerie Area), april 2011, entitled "Brute ou naive? La folie douce de Bonaria Manca" (Raw or naive? The sweet madness of Bonaria Manca)
* Exposition of photographs of Manca's work by Mario del Curto in Contemporart House Gallery, Genoa, December 2011 - January 2012
* Exposition of photographs by Salvatore Bongiorno, Museo Carlo Bilotti, Rome, October 2012
* Exposition of paintings, Festival Pergine (Italy), July 6-13, 2013