A small bridge over the Sasso river connected the Via del Pescatori in Bordighera (Italy) with Marcello  Cammi's garden, located near the Mediterranean Sea. On the picture the bridge is dotted with sculptures and so was the garden. Cammi's site included hundreds of sculptures.

No use to go there and take a look. The bridge and the garden have gone, the sculptures have disappeared. 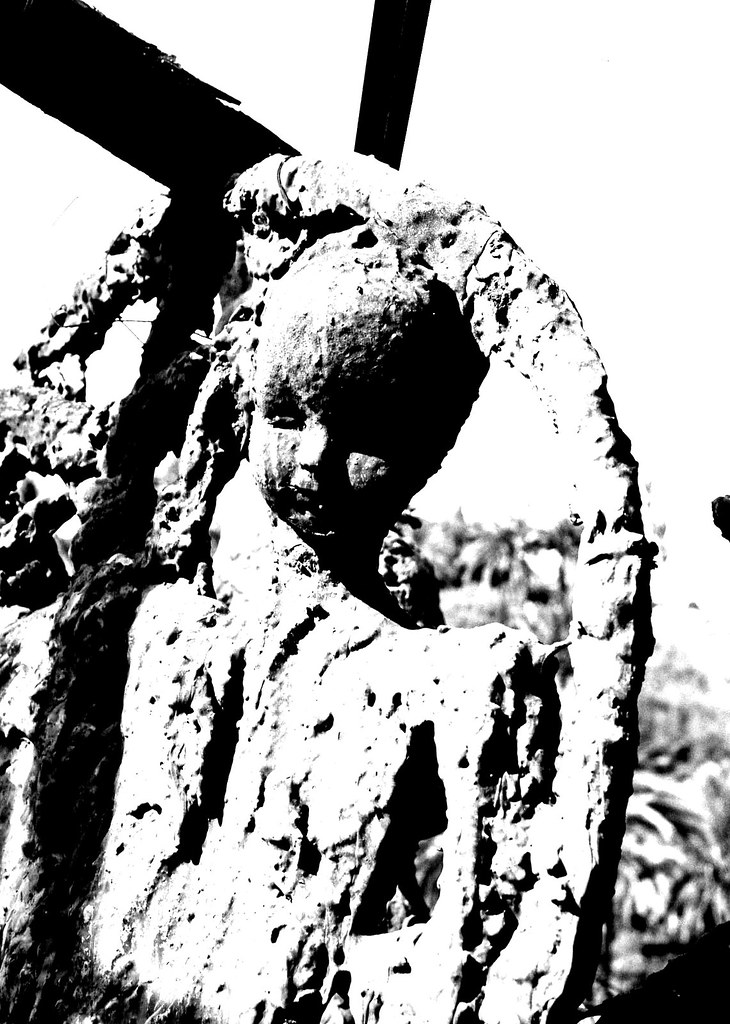 Born in San Remo, a community on Italy's Ligurian coast not far from the border with France, Marcello Cammi (1912-1994) at a very young age lost his mother.

Father and son moved to the nearby community of Bordighera and as a young man Cammi would assist his father, who had a business in making garden elements from concrete.

Some sources describe Cammi as a revolutionary or an anarchist, but probably he was rather a communist Italian style. Anyhow, during WWII he joined the Russian army in the war against Germany. He lost a finger of his left hand in 1941 and at the end of the war he was interned in Mauthausen. That period may have influenced his later artistic expressions. 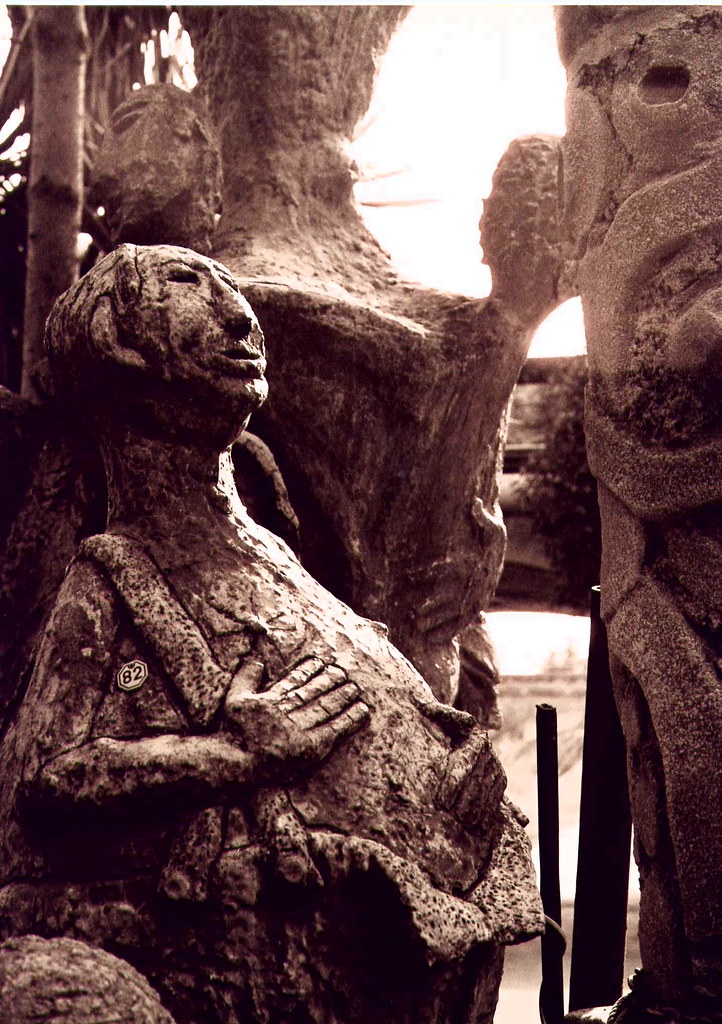 Once returned to Bordighera, Cammi resumed his profession as a mason, making concrete garden elements for his customers, such as benches, tables, fish pools or fences.

In the late 1940s, early 1950s Cammi began making sculptures by covering modeled iron frames with concrete. He displayed the sculptures in the garden around his house, located on a plot of land he rented from the city, located along the local Sasso river..

His sculptures included mythological characters, women, holy persons, animals, skeletal bodies reflecting the situation in Mauthausen and many other works, not just sculptures, but also artwork in low reliefs, half busts or  masks. A large part of his work was dedicated to the partisans of the Italian resistance during the war.

Active in sculpting during the rest of his life, Cammi may have produced some 3000 sculptures. and besides sculpting, he also made a large number of paintings. 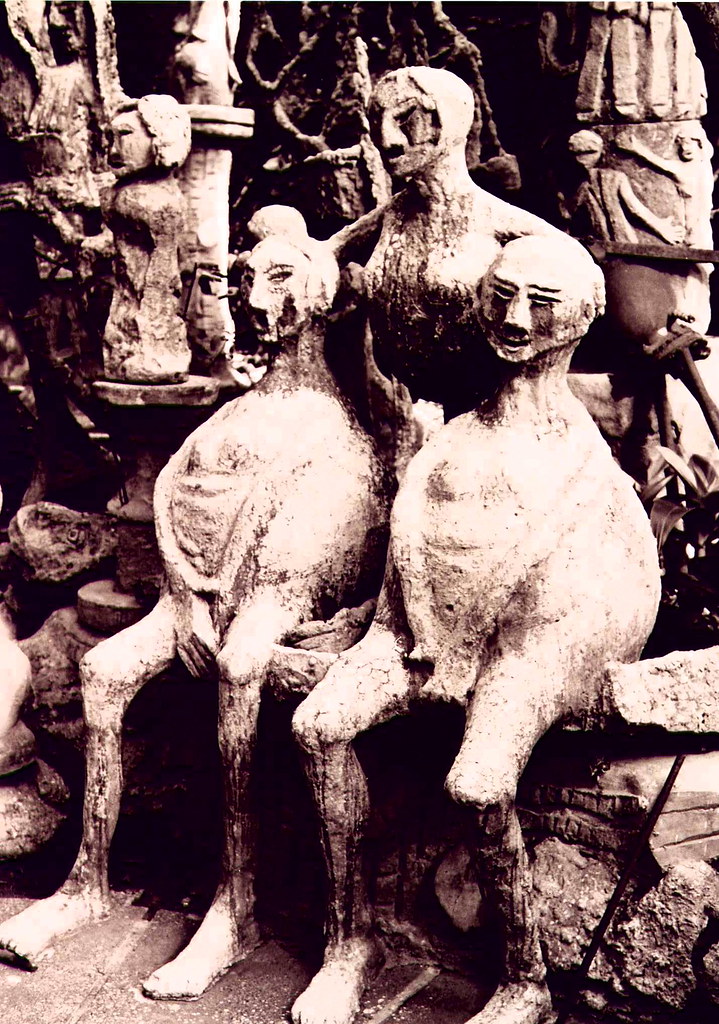 The fate of the garden

Marcello Cammi died November 3, 1994, soon after his son had died from a disease. His wife, Vittorina Cammi, has tried to take care of the sculpture garden, but she had to do this without any support from the community or local authorities.

The small river Sasso that runs along the garden could occasionally flow violently and in 1998 a flooding demolished its banks and some of the sculptures.

Around 2000 a (French) group of lovers of outsider art has tried to interest local authorities in taking measures to regulate the river to protect the sculpture garden against flooding, but this action was in vain. 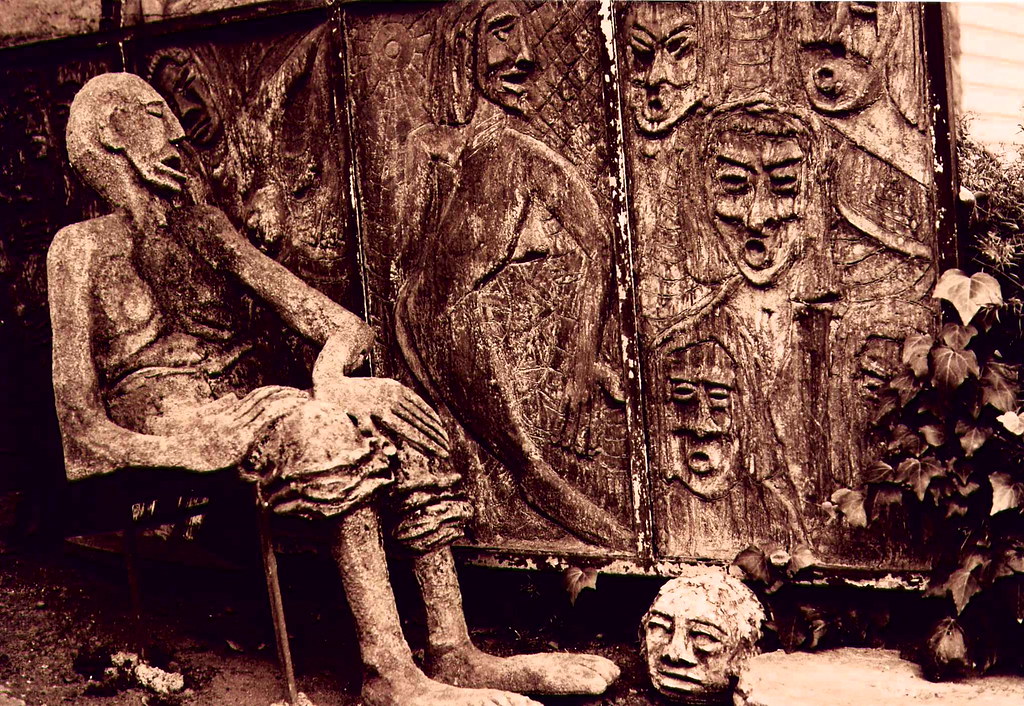 In 2005 a gas explosion at the premises caused the death of Vittoria Cammi and the destruction of another number of sculptures. On September 14, 2006 there was another flooding of the river, that destructed more creations or washed them into the sea.

A number of sculptures, legated to the city by Vittoria Cammi before her death,  were saved and were stored in various places

The September 2006 flooding was the end of Cammi's art environment. In October 2006, the city, owner of the terrain, cleaned the site with a bulldozer.

Many paintings however have been saved and have been presented at expositions.

A project to restore and re-expose the sculptures

What remained of Cammi's creations was stored in Bordighera in different locations. Around 2018, Marco Farotto, chairman of the council of Bordighera, took the initiative for a project to bring all the stored works together in one place, restore them and then find a suitable place where they can be exposed. This project was supported by the Mayor of Bordighera, Vittorio Ingenito.

A number of sculptures have now (2020) been renovated and on May 3, 2021, the Giardino di Cammi was inaugurated, an open space near the beach of Arziglia, where seven works by Marcello Cammi are placed.
Here are three photos taken of these sculptures during a trip made by Tiramisu Bootfighter in July 2022 as part of his project La Valise, Galerie Ambulante. 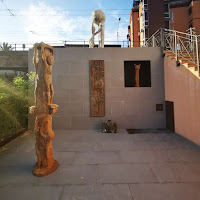 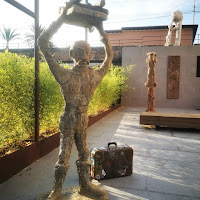 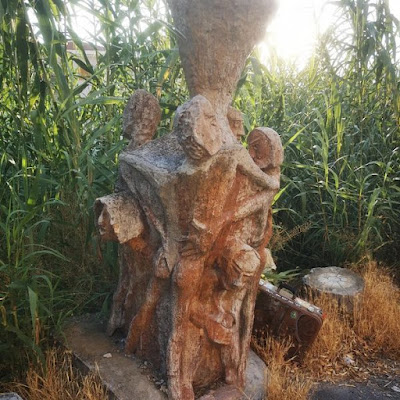 Documentation
* Film (1992) by Lothar Warneke Ich bin das achte Weltwunder.
* Film (1999, 12") by Murie Anssens Marcello Cammi Le jardin secret 1
* Pictures by Roberto Keller Veirana on Flickr
* Pictures (2010-2011) by Marisa Fogliarini on her website
* Pictures by Piero Farina on his website
* Pictures by Pierre Virol on his website (2 series)
* Article (January 2008) by Bruno Montpied on his weblog, with pictures (1990)
* Article on the website Costruttori di Babele.
* Article (2012) on SPACES website
Videos
* On a video (2018, YouTube, 5'50") Marco Farotto shows the stored sculptures and explains his project to restore them and to exhibit them in a suitable place

Marcello Cammi
Via del Pescatori
18012 Bordighera. Liguria, Italy
site demolished
in May 2021 the "Giardino di Cammi" with seven
sculptures by Cammi was inaugurated
Posted by henk van es at 12:20 PM